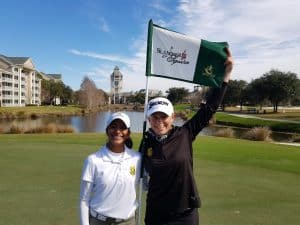 The South African pair will join 70 of the world’s top girls ages 12 to 19 in the prestigious 54-hole stroke-play event, presented by Rolex and hosted by Golf Hall-of-Famer Annika Sorenstam’s charitable organization – the ANNIKA Foundation.

Macnab will launch the SA challenge at the resort’s Slammer & Squire course in the first match out at 08h15.

“I had a practice round on Thursday and another on Friday during the Junior Am,” said Serengeti’s Macnab. “On Friday, I played with three American juniors and we had an absolute blast. They also invited me to attend the official opening ceremony with them. It was at the Hall of Fame on Friday night and I was so pleased that we got to meet Annika during the ceremony.

“The course is very unique. I haven’t played a course at home or anywhere else quite like it. It is quite open off the tee. You have some room for error with your tee-shots, but the course really tests your approach shots into the greens and your short-game, especially putting, because the greens are very undulating. I have a nice early start on Saturday. I am playing with Yoo Min Han from South Korea and American Lauren Beaudreau and I’m really excited to get started.

Moodley will star in the last match off the first tee at 10h05, playing alongside Jiayi Wang from China and American Jennie Park.

The #AnnikaInvitationalUSA is annually recognized as one of the strongest fields in girls’ golf.

Defending champion Angelina Ye from China will headline the international field hailing from 16 countries who will vie for the title and coveted World Amateur Golf Rankings and Rolex AJGA Ranking points.

Ye, who is based in Florida, is currently 8th in the Rolex AJGA Rankings.

Other top contenders include 2018 Annika Invitational Australasia runner-up Yuka Saso from the Philippines, who is currently ranked 6th in the Rolex AJGA Rankings and 7th ranked Sadie Englemann from Texas, who had four top-5 finishes in 2018 AJGA events.

“The Annika Invitational USA presented by Rolex has been taken to another level thanks to our partnership with the World Golf Village,” said Sorenstam, who will be onsite for the entire tournament and lead a Rolex-sponsored clinic on Saturday after the conclusion of the first round.

“Our ability to incorporate all the World Golf Hall of Fame offers into our programming makes tournament week especially memorable both on and off the course.”

ABOUT THE ANNIKA FOUNDATION
The Annika Foundation conducts major golf events for juniors on five continents. Five Invitational events are playing in the USA, Europe, China, Latin America and Australasia, as well as the Annika Cup in Sweden. These are complemented by the Annika Intercollegiate Presented by 3M and the Annika Award Presented by 3M, which is annually bestowed to the most outstanding female Division I golfer.

Since the inaugural Annika Foundation tournament was launched in 2009 in the United States and a total of 45 event alumnae have earned LPGA cards, with more than 600 playing golf at the collegiate level.