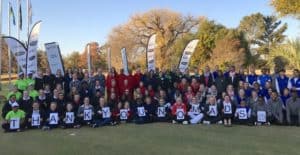 More than 100 of South Africa’s leading junior talents will tee it up in the 2019 Nomads SA Girls Championship at Orkney Golf Club from 30 June to 2 July; credit GolfRSA

ORKNEY, 29 June 2019 – All eyes will be on GolfRSA Junior Proteas Caitlyn Macnab and Kiera Floyd, who will spearhead the field in the annual Nomads SA Girls Championship at Orkney Golf Club from Sunday.

The Ekurhuleni pair have been in devastating form this season, with number one ranked Macnab racking up three titles, while 14-year-old Floyd converted a handful of close calls with a trophy finish in the Gauteng North Junior Girls Championship.

Together, the pair steered Ekurhuleni to victory in the WGSA 72-Hole Team Championship and partnering Kaiyuree Moodley, helped South Africa to a second successive All-Africa Junior Golf Challenge title – which came with a spot in the starting line-up of the Girls Competition in the Toyota Junior Golf World Cup in Japan this month.

Macnab and Floyd both hit their stride in the final round at Chukyo Golf Club last Friday, boosting South Africa to a top six finish with rounds of three-under 69 in the Ishino Course.

The pair will have to put their friendship aside this week, however, because both juniors are targeting the coveted title and the ultimate prize it carries – the chance to tee it up in the international Duke of York Young Champions Trophy later this year.

“This week is always high-pressure, because this is the one we all want; the Nomads SA Girls is the pinnacle – it’s like the SA Women’s Amateur of junior golf,” said Macnab.

“I am feeling positive, but this is a new week with new greens, different weather and lots of players with the potential to win. Besides, golf is played on grass, not paper. I think this year’s championship is wide open and the player who keeps it in play and brings a hot putter will take the crown.”

The duo could have a tough job staving off the likes of former SA Women’s Amateur champion Jordan Rothman and up-and-coming juniors Megan Streicher and Samantha Whateley.

The 2019 South African Juniors International champion came through a tough patch and will be gunning for a second Nomads title after making a welcome return to the winner’s circle in the WP Nomads Junior Girls Championship at Strand Golf Club in June.

Whateley – who starred for South Africa alongside Streicher in the ATI Ciputra Golfpreneur Junior World 2019 in Indonesia in May – underlined her rising star billing with two provincial victories this year. The Country Club Johannesburg junior backed up a breakthrough win in the KwaZulu-Natal Championship in March with her second trophy finish in the Limpopo Ladies Championship at Koro Creek Golf Club this month.

Streicher featured prominently in the SA Women’s Stroke Play and Match Play Championships in May. The Boland golfer tied for sixth in the 36-hole stroke play qualifier and reached the semi-final round at Woodhill Residential Estate and Country Club. She carried that form to Indonesia, where she tied for third in the Girls Class A Division for 15-18 year olds.

There are some dark horses who could throw a spanner in the works, though, least of all former number one ranked Woo-Ju Son.

The Gauteng golfer makes her competitive return after a lengthy eight-month injury lay-off, but having won the championship in wire-to-wire style in 2017 and 2018, Son will be one to watch.

Annelie Swanepoel is also on the radar since the Erinvale golfer lifted the Western Province Women’s Match Play title in March and former GolfRSA Junior Protea Symone Henriques is also in form, having featured in both of the two flagship events at Woodhill and arriving in Orkney on the back of a runner-up in the Limpopo Ladies Championship.

Pheletso Moto from Free State – a member of Womens Golf South Africa’s Talent Identification Squad – also showed some blossoming form at Woodhill, where she made the field for the match play and reached semi-finals for the Flight Division.

“With eight of the top 10 ranked juniors contesting the Championship Division, it is bound to come down to another nail-biting finish,” said Womens Golf South Africa President Sally Greasley.

“In addition, our title sponsor Nomads has given us tremendous financial support for this event annually, which enables us to bring many of our young talents from all across South Africa to compete in Orkney and to gain valuable experience at a top tier national championship.

“We are also delighted again to welcome five rising stars from Zimbabwe and Aulia Alfazema who will be looking after them this week.

“The Nomads SA Girls Championship is always a fabulous week where we are treated to great golf from our top players and we get to watch the emerging talent in action and we are looking forward to another fantastic edition of this prestigious national championship.”