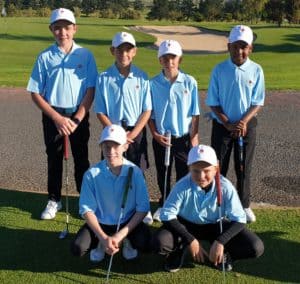 Defending champions Gauteng North opened up a 10-shot lead with a dream start on day one of the Nomads SA Under-13 Championship at Devonvale Golf and Wine Estate; credit GolfRSA.

25 September 2019 – Dujuan Snyman helped defending champions Gauteng North to a dream start in their title defence at the Nomads SA Under-13 Championship at Devonvale Wine and Golf Estate on Wednesday.

The Woodhill golfer anchored the team with a flawless seven-under-par 65 that also earned Snyman individual honours on day one of the 54-hole event.

Zinan Maimane from Silver Lakes carded 73, Roelof Craig and Ross Campbell added a pair of 74s to their tally and Dian Kruger sealed the top spot in the team event for Gauteng North with a three-over-par 75. The final member of the team, Benjamin van Wyk, returned a non-counting 78.

The 2018 champions will head into the second round with a commanding 11 shot lead over Western Province and a full 21 shots ahead of former champions Ekurhuleni.

“We had an absolute dream start to our title defence,” said delighted Gauteng North manager Morne Engelbrecht. “Our captain Dujuan played an unbelievable round of seven under par that helped us tremendously but the rest of the team also pulled their weight. Zinan was solid and holed some clutch putts towards the end and our rookies Ross, Roelof, Dian and Benjamin really put their hands up in their first taste of competing on this big stage.

“The guys all played around par and they can go lower. Roelof grafted throughout the round to stay close to par. Ross was on fire with the driver, but he battled a cold putter and Dian made a great birdie on 18 for 75. We are in a very strong position to make it two in a row and we are excited to see what round two will bring.”

“We moved to Pearl Valley so I have had a chance to get used to the conditions at the coast, but I am proudly Gauteng North and really excited to be here with the team,” said the 12-year-old.

“The course is in great condition and the greens are running nicely, but there were some tough pins in places. There was not much wind, so the course was scoreable. I’m happy with the start I’ve made in my own title defence and really pleased that I could help my team get in front.”

Boston Franks from Western Province is fourth on two-under, while Grant Labuschagne from Gauteng completes the top five on level par.