Jung leads in the wind 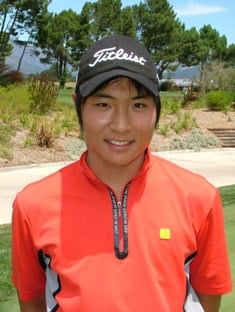 Yubin Jung fired a one under par 71 to take a one stroke lead amongst the morning field of players participating in the first round of the 72 hole South African Amateur Stroke Championship today.

52 players, of a field of 99, tied off this morning, at the Pearl Valley Golf Estates outside Paarl, in what could be described as a mild south easter. By the time the last match teed off, at 08h20 it was clear that the south easter would pick up and become a determining factor in the outcome of the first round scores.

17 year old Yubin Jung, who plays his golf out of the Wanderers Golf Club in Johannesburg confessed to being a reasonable wind player. He started his round on the 10th tee playing regulation to the 14th hole (his 5th) where he dropped a shot. He brought it back to level par birding hole 17, one of the hardest holes on the course today.

He played regulation until 5th hole (his 14th) where he recorded a remarkable eagle, holing his third shot from a greenside bunker on the picturesque par 5. He birdie the next, recorded two more pars only to record a double drop on what must have been the hardest hole on the golf course today, hole 9 (his 18th).

“I hit my approach into the bunker, managed to reach the green but saw my ball land on the edge of the green and spin back into the water hazard next to the green,” is how the young amateur described his setback and confirming that he is a good wind player. 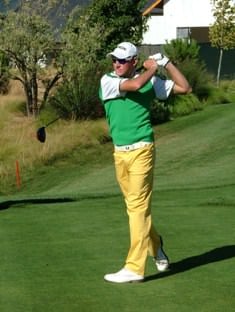 One shot back are two youngsters. The one is 17 year old in JG Claassen, who plays out of Orkney Golf Club in the North West Province, recorded a level par 72. The other is 19 year old Derik Ferreira, from Centurion Country Club in Gauteng North.

Two players were a further shot adrift, on 73, one over par. They are Michael Palmer, of Bryanston Country Club in Central Gauteng, and Robbie Oosthuizen, of Strand Golf Club in Somerset West (Western Province).

The afternoon scores will follow once the entire field have completed their rounds.