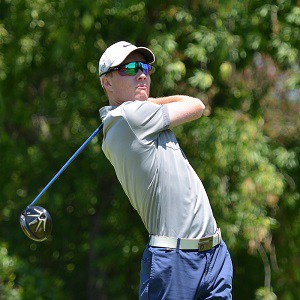 Shaun Jones from Ruimsig Country Club won the 12th Bridge Fund Managers Junior Series at Wingate Park Country Club and put himself in line to qualify for the North and South Junior Championship at the Pinehurst Resort in the United States in July; credit Ernest Blignault.

19 February 2018 – Shaun Jones is a step closer to a tee time at Pinehurst after he swept to victory in the 12th event on the popular Bridge Fund Managers Junior Series on Sunday.

Murad Hoosen from The Els Club Copperleaf and Victoria Golf Club’s Sean Paxton both birdied the par-five closing hole at Wingate Park Country Club, but the 17-year-old Jones from Roodepoort had done enough to seal a one-shot victory on two-under-par 70.

The Ruimsig golfer was delighted to join the winner’s list for the North Regional Final of the series.

“I finished fifth in the event at ERPM Golf Club, but I struggled at the Wanderers and shot 78. I knew I had to try to win this one. It got a bit tense there at the end with Murad and Sean piling on the pressure, so I can’t tell you how happy I am right now.

“I played Pinehurst twice when I was 10 and 11 in the US Kids Championships and I desperately wanted a chance to go back. The number two course, where they are playing the North and South Junior, is awesome and to have chance to play against the best juniors in the world is priceless experience.”

Jones didn’t make the best start when he three-putted the third for a bogey and he was two over after another drop at the fifth where he missed the green left and failed to up and down.

“I reversed some of the damage with a great up-and-down at six and then I nearly holed out at eight,” said the Trinity House High School pupil.

“I hit a gap-wedge to an inch, but the ball spun back. I had a 20-footer left and I nailed the putt for birdie. I made another good birdie at 11 to move to one-under. I hit 2-iron off the tee and a pitching-wedge from 145 metres out to seven foot and boxed the putt.”

“I hit my driver down the left of the fairway to give myself a good shot into the green and hit a 9-iron from 170 metres. It came out too hot, though, and I had to up-and-down to save par. Then I had a tense wait to see if I’d done enough.”

The Gavan Levenson Academy member was stoked to qualify for the North Regional Final.

“I think the Bridge Fund Managers Junior Series is such an awesome series,” he said. “We can’t all travel around the country to play the provincial and national junior events, so to have a series that offers a great prize and the chance to play high quality, competitive golf is really great.

“I’m really grateful to my parents whose support has been unbelievable. Thanks to them I have a really great team. Gavan, my fitness coach Barry and my sport psychologist Theo and I are all going to work really hard in the next few weeks to get me in tip-top shape for the final. I really, really want to win the chance to tee it up at Pinehurst again.”

Schedule, entry lists and results of the #BridgeJuniorSeries available at https://juniorseries.bridgefm.co.za

Bridge Fund Managers is a specialist asset manager operating in the retail, institutional, private clients and stockbroking markets. At BRIDGE we harbour and nurture our clients’ hard-earned assets. Our unique Payers & Growers® investment methodology is designed and actively managed to assist investors in securing high and growing income streams and inflation-beating capital returns through their investment portfolios. For more information please visit http://www.bridgefm.co.za.