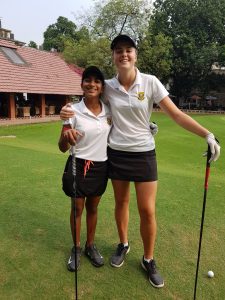 Kaiyuree Moodley from Gauteng and Kaylah Williams from Western Province at the 2018 IGU All India Ladies Amateur Championship in India; credit GolfRSA.

KOLKATA, India (30 November 2018) – One of the two South African juniors competing in the 2018 IGU All India Ladies Amateur Championship will start Saturday’s semi-final round at the Tollygunge Club golf course in India, but the spot came at a heavy cost.

Kaiyuree Moodley and Kaylah Williams advanced to the quarter-finals, but had to face each other for a spot in the final four.

The spoils went to Bryanston’s Moodley, who won the match 4 & 2.

It wasn’t the first time the petite Gauteng golfer bested Williams, but it was a lot tougher than the play-off win in the Southern Cape Open or the three-shot victory in the Boland Open earlier this year.

“That was really hard,” said 16-year-old Moodley, who won her second round match against fifth-placed qualifier Hitashee Bakshi 1-up.

“Kaylah and I both hoped to reach the final, but once we saw the draw, we realised that if we kept winning, we would play each other in the quarter-finals. “Standing next to each other on the tee box, we both agreed to give it our best shot and whoever the lucky winner was, would have the other one’s support. I got lucky, but Kaylah was so supportive and it’s great to have her in my corner.”

Williams faced Nayanika Sanga, who finished third in qualifying stage in the second round. The Western Province golfer won 3 & 2.

“Unfortunately Kai and I were on the same side of the draw, but the upside is that one of us still has a chance to defend the title,” said the 17-year-old. “Kai played brilliantly and she deserved the win, so I will be with her on every hole, holding the South African flag and rooting for her.”

“Kai started her morning match with a hit a poor first drive,” said Greasley. “She ended up under the trees, could only punch out and lost the first hole but bounced back with a great putt at the second to square the match.

“She went 1-up after a great bunker shot at the eighth and kept the lead until the 17th hole, where she miss-hit her tee shot. Her swing was restricted by an immovable obstruction and she punched out best she could, but made five, and Hitashee squared the match with a par.

“Hitashee drove it out of bounds at the tough par three closing hole and her second tee shot finished short of the green. Kai hit a good 5-iron that bounced on the car-path, but stayed inside the out of bounds area. She holed an eight-footer for par and won the match when Hitashee putted for four.

“Kaylah and Kai were a little nervous playing each other and both drove it into the trees on the first hole. They were both on the green for three, but Kai holed her putt to go 1-up. At the fourth, Kai missed her second putt and the match was all square.

“Kai took the lead again on five when Kaylah hit her chip-shot long, but the match was back to all-square after Kaylah holed a long birdie putt at the sixth. They halved the eighth in birdies, but Kaylah ran into some bunker trouble on eight and Kai went 1-up again.

“Kaylah’s chip landed short of the green on 13, and Kai two-putted go 1-up, She went 2-up with another good two-putt par on 14 and they halved 15 and on 16. Kaylah’s drive nearly went out of bounds on 17, but Kai drove it down the middle and hit a nice shot into the green. Kaylah could only punch out and was on the green for three. Kaiyuree walked her first putt to inches from the hole and won the match when Kaylah putted for four.

“Both girls both played some fantastic golf and we were all really sad that they had to go up against each other. They are great friends and played the match in the greatest of spirits.

“Kai has been really solid tee to green and that should serve her well in the semi-finals. She will go up against Jahanvi Bakshi, who finished second in the stroke play qualifying. She is the older sister of Hitashee and Kai is really looking forward to the match.

“Last year Danielle du Toit won the title and it’s fantastic to have the South African flag once again flying high in India. The girls are thoroughly enjoying the experience and Kaylah plans to support Kai every step of the way.”