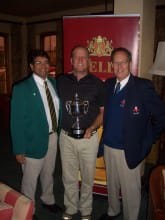 Conditions at De Zalze were tough for scoring after heavy rain on Wednesday saw suspension of play during the first round. The next three rounds however were played in calm but cool conditions but scoring was tough as the course play very long because of the wet conditions and the ball not travelling through the heavy air.

Johnston finished on a score of 287 (1 under) par with solid rounds of 71-69-73-74. Stafie Barnard from Southern Cape finished second on 292 followed by Andrew Mackie (WP)and Ramon Rahme (Ekurhuleni) tied on 295.