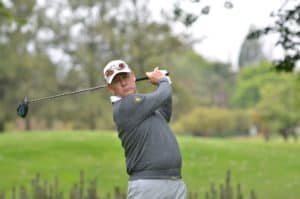 16 October 2019 – Stephen Johnston sits atop of a congested leaderboard after opening with a one-under-par 71 in the South African Senior Amateur Championship on Wednesday.

Morning starter Schalk Naude from Randpark set the early clubhouse target at Durban Country Club with an even-par 72, but the 53-year-old Johnston bested his Central Gauteng Senior Inter-Provincial captain by one shot in the late afternoon.

Johnston, who tied for third in the premier senior event at Heron Banks River and Golf Estate last year, has never broken par on numerous visits to the popular South African Open Championship venue, and the Ruimsig golfer was understandably pleased to have put himself in contention with a solid opening effort.

“This is Durban Country Club. It’s one of the most iconic golf courses in South Africa and probably one of the toughest. You can’t win it in the first round, but you can certainly lose it here,” he said.

“The top seniors in South Africa are playing this week and one look at that jam-packed leaderboard confirms it. Many of the top guys are in with a shout. It’s just day one and there is a lot of golf to be played, but you can see big swings on this course and things can go south quickly, so I’m happy with the start I made.”

Johnston got off to a good start with three successive pars from the 10th.

He moved to two-under after birdies at the par four 13th and par four 16th, but dropped his first shot of the day just before the turn. He had his second bogey at the par four sixth, but got himself back to one-under when he took on the intimidating par four seventh.

“I took it on with the driver, which most guys wouldn’t do, and I hit a great sand-wedge in to a couple of feet and boxed it for birdie,” Johnston said. “I made a great par at 17 after my tee shot pitched on the slope, rolled back and finished in a divot and another solid par on the ninth.

“You’ve simply got to keep it in play on this course, because you can’t make birdies or pars from the bushes. The key to my game was keeping it in play, and my caddie. Clive is a local caddie and I’ve never seen someone read the lines as well as he does. He is definitely my secret weapon.”

In addition to Naude, there are 20 golfers within five shot of Johnston in the chasing pack.

German golfer Ulrich Schulte also got to one-under through 17 holes, but the Buchumer GolfClub member he failed to up-and-down from a fairway bunker on the par four ninth and had to settle for third on his own on one-over after walking off with a double bogey.

Basil Naidoo got the KwaZulu-Natal fans fired up when he reached his 17th hole on level par, but the local golfer dropped shots on the final two holes to finish in the bus at two-over alongside Peppy Black from Kuruman, Glendower’s Ramon Rahme, Greg Woodbridge from Atlantic Beach, Steve Smit from Middelburg Golf Club and Zwartkop pair Neil Goosen and William Skinner.

Wellington stirred up support from the local fans when he holed out from 137 metres with an 8-iron to record his 10th career ace at the par three fourth. Remarkably, this was also the Kyalami golfer’s third SA Senior Amateur hole-in-one, following aces on the 17th at Randpark Golf Club and the 13th at Pecanwood Golf and Country Estate in previous editions.