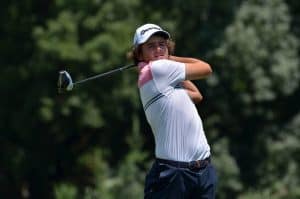 10 February 2021 – Casey Jarvis moved into a two shot lead on moving day in the African Amateur Stroke Play Championship, and within touching distance of the GolfRSA South African Swing trifecta on Wednesday.

Jarvis achieved the rare double last year – winning the SA Stroke Play and SA Amateur titles in the same calendar year – and the 17-year-old took a huge step towards achieving the hat-trick with a six under par third round 66 at Glendower Golf Club.

Van Wyk putted his way to another gain on the ninth and it looked like Jarvis may have played his way out of it when he fell to a double bogey at the par four.

“I left it in the trees, and the only shot I had was to chip out sideways,” Jarvis said. “I wedged it to 20 feet past the flag and three-putted. But I bounced back nicely with four birdies in a row to go ahead again.”

Back-to-back birdies on 15 and 16 followed and Jarvis held a three stroke advantage as he stood at the 18th tee.

“It’s a pity that I couldn’t save par at the last. The putt looked in all the way and just caught the edge of the cup and ran around the hole. It happens; you just have to move on,” he said.

Despite the bogey finish, Jarvis remained at the summit on 14 under.

It was a vastly different performance from the former GolfRSA No 1 from the battling fourth place finish he posted in the SA Stroke Play last week.

“I really struggled with my swing at Randpark and I couldn’t sink a putt. But I found something during the practice round on Sunday. I am really striking the ball well. The putter was cold in the first round, but more putts dropped on day two and today I was rolling them nicely. It’s great to be out there enjoying myself again.

“Kieron and I played together for the first two rounds at Randpark.We spur each other on and today, we had a great due. He is playing so well right now and it was just a pity that his putter let him down a couple of times. I’m looking forward to facing him in the final round.“ 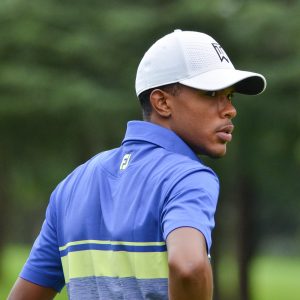 Kieron van Wyk is 2 shots off the pace in the 2021 African Amateur Stroke Play Championship at Glendower with 1 round to go; credit Ernest Blignault

Nineteen-year-old Van Wyk, the runner-up in the SA Stroke Play, is equally stoked to be in the final group again.

“I am excited to be in the final group with Casey,” he said. “We are both very competitive with the result that we push each other. We had a nice bit of match play going on today and I suspect it will be more of the same in the final round.”

The South African Golf Development Board graduate offset a brace of bogeys with an eagle and five birdies to finish on 12-under.

“Just like the second round, the score could have been even lower than 67. I had two lip-outs, and the one on on 15 was really frustrating. Kyle (de Beer) and I had the same line, but his putt held the line and mine circled the cup. But that’s golf. I played steady, really solid golf and I am really happy that I’ve been producing good scores for two weeks now.”

Houghton golfer Judd Sundelson moved to third on the leaderboard on eight-under, courtesy of a 68, while local favourite Yurav Premlall also joined the top five. The two-time club champion carded a round of 68 to finish in fourth on seven-under.

Francois van der Walt registered a single bogey in a six-under round of 66 to tie for fifth on six-under with De Beer, who returned an even-par 72. Defending champion and last week’s SA Stroke Play winner, Martin Vorster, carded 70 and will start the final round on four-under.

Long carded for a 74, but not long after he handed in his signed card, the Englishman returned to the scoring area to declare that he had signed for par on the fifth, when in fact he had dropped a shot.’