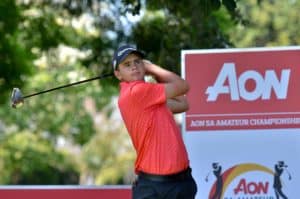 16 February 2020 – A back nine birdie blitz by Casey Jarvis for a nine-under-par 63 saw the country’s number one ranked amateur surge to a two-shot lead on day one of the Aon South African Amateur Championship on Sunday.

Just three days after Jarvis became the youngest South African Stroke Play champion with his nine-shot triumph at Randpark, the 16-year-old was in ascendancy again at Royal Johannesburg and Kensington Golf Club.

The State Mines golfer was flawless around the West Course as he navigated his way to a two-shot lead in the 36-hole stroke play qualifier.

Jarvis fired two birdies to start, and rolled in a trio of birdie putts at the eighth, ninth and 10th holes. A birdie on the par four 12th took him to six-under and he fashioned another trio of birdies from the 15th to edge in front of the field. He was just slightly disappointed that he failed to take advantage of the par five closing hole.

“I was on the right of the fairway and didn’t have a shot at the green, so I tried to cut it but the ball just stayed straight. I short-sided myself between the two greenside bunkers, but I chipped it middle green and two-putted for par, which I will definitely take any day,” Jarvis said. “I’m looking forward to playing the East Course on Monday. I won the Central Gauteng on the East last year and it’s my favourite of the two courses.”

“I’ve been staying with Casey for the last two Africa Swing events, and we had some serious putting competitions at Randpark. He is either rubbing off on me or it was the potato bake his mom made us last night, but the putter was just really hot today,” said the Western Province golfer, whose faultless 67 sported an eagle on the second and five birdies. 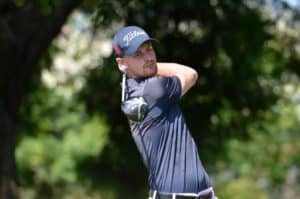 James Biggs from England in action during the first round of the 36-hole stroke play qualifier at the Aon South African Amateur Championship at Royal Johannesburg & Kensington Golf Club; credit Ernest Blignaut.

Biggs also produced a bogey-free 67s while Wilson pencilled a lone bogey on his card at the par three 16th. The Scotsman also eagled the par five second, while Biggs need just two good shots and a fine putt for a three at the closing hole.

Olly Huggins, who lost to South Africa’s Martin Vorster in a four-hole play-off at the African Amateur Stroke Play Championship, is back in contention. The Scotsman carded 66 to sit in fifth alongside countryman Darren Howie, Charles Larcelet from France and South African trio Christiaan Maas, Jonathan Broomhead and Jordan Burnand.

Matthew Dennis gave the home crown a reason to cheer. The local golfer opened with a 67 to grab a share of 11th with Yurav Premlall and English pair Haider Hussain and Sam Bairstow.

Action moves to the demanding East Course on Monday and the leading 64 players at the conclusion of the 36-hole qualifier will advance to the match stage of the competition.