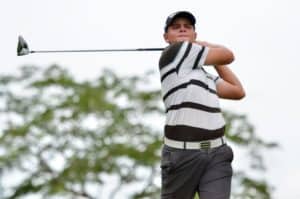 12 February 2020 – Overnight leader Casey Jarvis held steady during round three to take a commanding four-shot lead into the final round of the South African Stroke Play Championship at Randpark Golf Club.

The fearsome Firethorn Course had proved scoreable in the first two rounds after torrential rain on the eve of the event had softened up the greens.

Jarvis opened with rounds of 66 and 65 to open up a two shot lead, but firmer greens and breezy conditions in the afternoon made it a different proposition on Wednesday, but the country’s top junior got around in 67 strokes to get to 18-under-par.

“I just kept it in play really nicely, as I’ve done over the first two days,” said the 16-year-old Boksburg resident. “That’s the key to scoring well here; hitting fairways and greens. I was driving it really well and I’m putting well too. On a course like this you can score well if you hit the fairways, but if you don’t you can really struggle.”

Jarvis began the season with victory in the Free State Open and he carded rounds of 69, 63, 64 and 63 at Centurion Country Club to win the Gauteng North Open by eight shots. Now he is targeting one of the two flagship titles on the GolfRSA and with 22 birdies and just four bogeys in 54 holes, his chances keep improving.

“I got it to 19-under, but I had a three-putt bogey on the 16th. I was still putting really well on the back nine, but a lot of them burned the edge or stopped in the jaws. You just have to accept it and move on; I’m learning how to use the frustration to build positive energy.”

Although happy to sleep on a four-shot cushion, Jarvis is taking nothing for granted, least of all Irishman Rowan Lester in the chasing pack.

“I have always wanted to win the SA Stroke Play and the SA Amateur, but I’m not going to change my strategy for the final round. Rowan is a really good golfer, so I expect him to make a charge. The greens are only going to get firmer, so I am sticking to my game plan. Nothing heroic, just fairways and greens.” 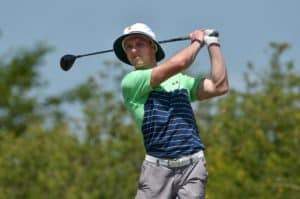 Two off the pace after rounds of 66 and 67, a steady 69 helped Lester to stay in touch.

“It was a really steady round,” said the former North of Ireland champion golfer. “I offset a pair of bogeys with five birdies and the highlight of my round was on the ninth, where I stuck it in the bunker and then holed the trap-shot for birdie to keep the momentum going.

“The greens were much firmer and it was a lot harder to get it out of the rough if you missed the fairways. I’m pretty happy with a 69 and I look forward to a nice battle with Casey tomorrow,”

South Africa’s Kyle de Beer and Caolan Rafferty from Ireland emerged as the next closest challengers. Port Elizabeth’s De Beer matched Jarvis with a 67 to move to 11-under while a seven-under 65 propelled Dundalk golfer Rafferty to fourth on 10-under.

The 15-year-old reigning Nomads SA Boys U-17 champion and 2019 Reply Italian U-16 Championship winner knocked in a birdie putt at the final hole for a round of 70 and made it a five-way tie on nine-under. Also tied for fifth were Frenchman Nicolas Muller and compatriots Dirkus Joubert, Keagan Thomas and Kieron van Wyk.

African Amateur Stroke Play Championship winner Vorster and Gloucestershire’s Hussain are a further shot back after respective rounds of 71 and 72, with Ernie Els and Fancourt Foundation standout Siyanda Mwandla (69) and James Sugrue from Ireland (72) in joint 10th.