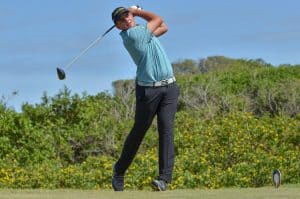 Casey Jarvis from Ekurhuleni fired a blistering six-under-par 66 to surge to the second round lead in the Nomads SA Boys Under-19 Stroke Play at Humewood Golf Club; credit GolfRSA.

25 March 2019 – Casey Jarvis produced a blistering back nine at Humewood Golf Club to charge to a one-shot lead in the Nomads SA Boys Under-19 Stroke Play Championship on Tuesday.

Jarvis was three off the pace after an opening 70 at the start of the second round, but stirring finish for a six-under-par 66 saw the 15-year-old surge to the top with a 36-hole total of eight-under 136.

The State Mines golfer already owns three of the four Nomads SA Boys titles – having won both the Under-15 and Under-17 tournaments last year – and is aiming to become only the second junior after fellow Ekurhuleni golfer Jayden Schaper to achieve the ‘grand slam’.

Ten holes into the second round, Jarvis was still level par for the day, but a brace of birdies at the 13th and 14th holes propelled him towards the leaders. An eagle three at the par five 15th, followed by another pair of birdies at the closing holes catapulted Jarvis into pole position.

Overnight leader Tyran Snyders, who set the first round mark with a five-under 67, stayed in touch with a two-under 70.

The Durbanville golfer will start the third round tied for second with fellow Western Province junior Sam Simpson, who returned a 68.

Nikhil Rama from Central Gauteng followed an opening 69 with a 71 to take sole sixth on four-under.

Jordan Burnand from Ekurhuleni rounded out the top 10 on two-under.

Drikus Joubert, Jaime Clive Lewis and Malan Potgieter completed the list of players to finish below par on day two when they tied for 11th on one-under.

The cut to 64 and ties fell at 10-over with 66 players contesting the third and final rounds on Wednesday, 27 March. At the conclusion of the  Nomads SA Boys Under-19 Stroke Play championship, only the 32 players will advance to the Match Play Championship from 28-30 March.