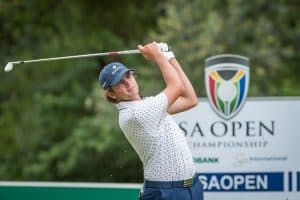 3 December 2020 – Reigning SA Amateur champion Casey Jarvis and in-form Christiaan Maas laid down early markers in the hunt for the prestigious Freddie Tait Cup on day one of the South African Open Championship at Sun City.

Both GolfRSA National Squad players opened with rounds of one-over-par 73 on Thursday to tie for 47th, six shots behind the six-pack that share the lead at the Gary Player Country Club.

Jarvis had the benefit of an early start on the 10th tee, but the added pressure of two pretty high profile playing partners.

The reigning SA Amateur champion historically has the privilege of playing with the defending champion over the first two rounds in the SA Open.

Jarvis was initially disappointed to learn that Branden Grace would be competing on the PGA Tour, and not make the trip to South Africa. In the end, he was paired with two of the first round pacesetters – 25-year-old European Tour campaigner Matthias Schwab from Austria and the 2020 Alfred Dunhill Championship winner Christiaan Bezuidenhout.

“I had such a great time playing with them and I learned so much. It was probably a lot less nerve-wracking than it would have been playing with Grace,” said the 17-year-old.

The South African No 1 broke a string of pars on the front nine with his only birdie of the day on the ninth, and gave two shots back coming home on the sixth and seventh holes.

“I hit the ball tremendously well and I hit a lot of greens. I missed a few greens but chipped it nicely, but I just really struggled on the greens. I didn’t hole anything. I three-putted 11and seven and even two-putted for the birdie on nine. Chris and Matthias putted so well. It was such a great learning experience for me; I definitely know that I still have a lot of work to do to get to that level.”

An honest assessment from Jarvis, who made international headlines in February when he eclipsed a 51-year-old record held by Dale Hayes to win the 2020 SA Stroke Play Championship by nine shots on 25-under 263 at Randpark and routed Scotland’s James Wilson 7&6 in the 36-hole final of the SA Amateur on the East Course at Royal Johannesburg & Kensington Golf Club to claim the rare calendar double.

“I experienced it at Leopard Creek last week; the pros play on a whole other level. I never felt out of place during the round, like I didn’t belong there, but you can see the difference their experience makes on a course like this. It was great having my dad on the bag, especially for the first day. Hopefully we have a better putting day on Friday.” 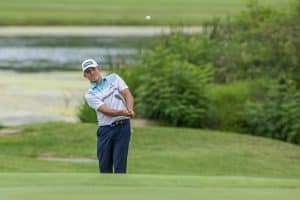 Maas – who came into the week on the back of five wins and a blistering eight-under 64 that earned him the winning spot in the ERPM qualifier – took a very different route to his opening 73.

The first couple of holes was a combination of errant tee shots, unlucky bounces, a visit to the famous bush and some very effective scrambling. The 2020 Silver Salver champion was five-over through 14 holes before he pulled it back with four birdies on the bounce.

“I made four solid pars from the sixth hole, and that settled me down,” said the 17-year-old Pretoria Country Club golfer. “I birdied the par five (11), but gave it back with a triple on 12 after I had to hack it out of bush. Took a penalty shot on 14 after my ball hit the car path, but then I started to turn things around.

“I hit the green in two on 15 and made a long birdie putt and holed a 35-footer on the short hole. On 17, I hit 2-iron off the tee and 6-iron to 5-feet and holed the putt. On the last hole, I had just 180m to the pin after a long drive, but there was a tree in my way, so I had to lay-up. I landed a lob-wedge behind the hole and it spun back to 3-feet below the hole and I made the putt.

“I really enjoyed my first SA Open and playing in a European Tour co-sanctioned tournament. It was a really great experience and I hope I can build on this start to make the weekend.”

Mbetse, who plays his golf on the collegiate circuit in the United States, got stuck in South Africa by the lockdown after coming to visit his parents in Melrose, Johannesburg.

The 21-year-old was stoked to secure a spot in a play-off in the Modderfontein qualifier and he was still excited about the experience of playing in the national open for the first time, despite not having the kind of round he had hoped for.

“It was a really great first experience at the SA Open,” said the Randpark member. “Obviously the wind in the afternoon was quite tough, but to be honest, I didn’t really get anything going out there today and I was struggling on the greens and around the greens, as well. I made a few silly mistakes that cost me but it was still such an enjoyable experience. I am just thrilled to be here and absorb it all.”