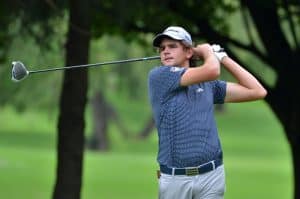 9 February 2021 – Local favourite Casey Jarvis gave the Ekurhuleni golf fans plenty to cheer about as he moved into the outright lead at Glendower Golf Club on day two of the African Amateur Stroke Play Championship.

The reigning SA Amateur champion was composure personified as he bettered his opening round 71 with a seven-under-par 65 to take one-shot lead on Tuesday.

The 17-year-old Jarvis has struggled to find the form that won him the rare SA Amateur double last year and netted him the Freddie Tait Cup as the leading amateur in the SA Open in December.

Wayward drives and iron shots and a cold putter highlight his title defence at Randpark, but the tenacious Jarvis scrambled unbelievably well to tie for fourth and he is turning things around here at Glendower.

“I found something in my golf swing during the practice round. I hit the ball incredibly well in the first round, but I just made nothing. Today I hit it even closer, and the putts began to drop,” Jarvis explained.

Jarvis gained momentum early with an eagle on his third hole of the day – the par-5 13th.

“That eagle definitely gave me momentum and I birdied the next two holes. I had 245 meters flag, and my caddie and decided on the rescue, starting at the right bunker to finish 20 foot right of the flag because the danger is on the left. I pulled the shot off exactly as planned and rolled in the putt for eagle.

“I birdied the second and the third, then dropped the fifth when I hit my first bad iron-shot of the week and I short-sided myself. I hit a good chip, but I missed a five-footer for par. Next hole, I hit a good iron-shot, just short-clubbed and made another drop, but then I bounced back with three birdies.

The State Mines golfer knows he has a lot of fans hoping he will complete the GolfRSA South African Swing trifecta this week, but he is pushing all thoughts of winning to the back of his mind.

“My only target for the next two rounds will be to hit as many fairways and greens as possible,” Jarvis said. “The course is not that long, but it’s tight and the rough is very thick and wet. You need to be precise off the tee. The greens are just perfect, though. It’s a great course for a championship like this. I’m just happy to be playing decent golf again, but there is still a lot of golf left, so it’s not time to think about winning. That comes on the 18th hole on the final day.” 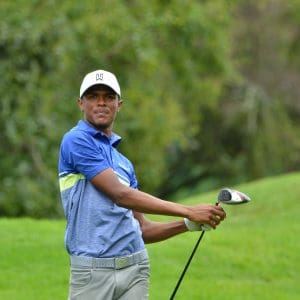 GolfRSA National Squad member Kieron van Wyk is in the title hunt for a second successive week. He trails leader Casey Jarvis by one shot after rounds of 71 and 66 in the African Amateur Stroke Play Championship at Glendower Golf Club; credit Ernest Blignault

Ruimsig’s Van Wyk, who shot 67 in the final round at Randpark last week to seal a runner-up finish in the SA Stroke Play Championship, is back in the title hunt.

The South African Golf Development Board graduate racked up eight birdies for a six-under 66 and card was marred by a single soft bogey on his 10th hole. He was equally pleased to see his swing changes paying off handsomely.

“I started working with Grant Veenstra on my swing…. on getting the club more on plane, because it was a bit too steep. On the putting side, I realised I was keeping my hands to low and keeping the club just a bit too upright.

“I could have gone a bit lower, but I left two easy birdies out there on the front nine. But I kept the momentum going. I’d say my best hole was the seventh. I hit 3-wood off the tee and blocked myself in the trees. I managed to get a pitching wedge around the trees and walked away with a birdie.” 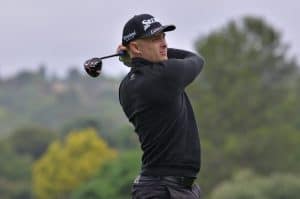 Port Elizabeth’s Kyle de Beer moved within two shots of the lead with a second round 66 in the African Amateur Stroke Play Championship at Glendower Golf Club; credit Ernest Blignault

De Beer turned in three-under with birdies on 10, 11 and 15 and he overturned a bogey on the second with his fourth gain on the sixth.

The Ernie Els and Fancourt Foundation member had another drop on the par-4 seventh, but an eagle on the par-5 eighth got De Beer back to four-under for the day. The Port Elizabeth golfer signed for 68 and sole third on six-under.

After some hiccups on his outward nine, Burke steadied the ship with five birdies on the bounce from the 11th. A birdie finish for 66 left the Potchefstroom golfer three off the pace in fourth.

The Englishman said the lengthy break since his last competitive starts in December shows, and he is still struggling to adjust to the altitude change.

“It’s great to have a card in the hand again, but I’m not my old competitive self yet,” said the 23-year-old Lansdown golfer, who sits in joint sixth on three-under alongside Yurav Premlall and Zandre Labuschagne.

“I’ve have been fortunate to have been here in South Africa since November in the sunshine for my winter practice, but I’ve been based in Somerset West down at sea level, so getting used to the altitude change has been tricky. I had a few wedge shots that went a lot longer than I was expecting.

“I couldn’t get anything going, but I just tried to hang in there, really, because this is good prep for America and the Masters. I’m only five behind. I’ve just got to stick with it and be less focussed on the outcome. I need to get back to my process and take care of the things I can control and whatever will be, will be. Just enjoy it.”

Defending champion and last week’s SA Stroke Play champion Martin Vorster is a further stroke behind on two-under in a tie for sixth with Altin van der Mewe and Simon du Plooy.