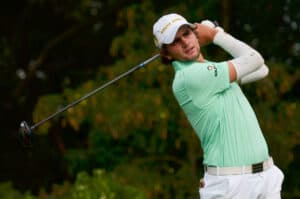 Casey Jarvis stepped up his title defence in the African Amateur Stroke Play Championship with a seven-under-par 65 in the second round to take a two-shot lead at Leopard Creek; credit GolfRSA.

15 February 2022 – It took him a few years to work out that patience pays at Leopard Creek, and that’s the recipe for success Casey Jarvis applied to step up his title defence in the African Amateur Stroke Play Championship in Tuesday’s second round.

The GolfRSA National Squad member fired nine birdies, including four on the bounce from the 15th, to sign for a seven-under-par 65, which was the best round of the day.

He shot straight to the top of the leaderboard and will sleep on a two-shot lead on nine-under.

“I was really solid today,” said the 18-year-old State Mines golfer. “I drove it well and I was good around the greens. The putter was solid, especially on the front nine.”

The African Amateur joined the South African Swing in 2016 and Jarvis became the first amateur to complete the Trifecta, when he followed his SA Amateur and SA Stroke Play Championship triumphs in 2020 with victory in the African Amateur at Glendower last year.

However, winning this prestigious international event at the magnificent Leopard Creek would be “the real McCoy”.

“I played the African Amateur for the first time at this course in 2019 and it’s been a goal ever since to win it here,” he said. “I achieved my dream of completing the Trifecta last year at Glendower but defending my title this week is high on my bucket list for this season.

“It’s taken me a good few years to get to know this course, but I feel like I have its measure this year. I didn’t attack every hole, and I didn’t go for all the flags. I laid up quite a few times, but I kept on scoring, so patience and strategy really paid off. And I came into the event some confidence, having won the Gauteng North Open and reaching the semi-final in the SA Amateur. If I can keep playing like I did the last two days, I have a chance.”

Even with experience and the lead on his side, Jarvis will take nothing for granted. “We have a world-class field out here with plenty of guys who can turn it on. I will still have to grind it out.” 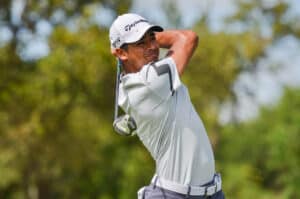 Chasing him down is a very capable pack of golfers, led by South Africa’s Yurav Premlall and England’s Zach Chegwidden. Both overnight leaders fired two-under-par 70s to share second place on seven-under.

Premlall, the runner-up at Glendower last year, once again relied on a superb short-game to stay in touch. The 17-year-old got knocked out by Jarvis in the quarter-finals of the SA Amateur last week and admits the leader will be tough to beat.

“Casey is running hot right now, and we know how dangerous he can be when he is on song,” the Glendower junior said. “I am striking the ball well, and putting really good, so I just need to find a few more greens. It was a lot better today, so I will keep at it and try to make a few more birdies in the next two rounds. But I am enjoying being in contention again; it’s what we all work for.” 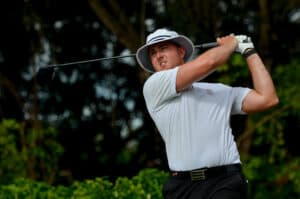 England’s Zach Chegwidden will start moving day in the African Amateur Stroke Play Championship just two off the pace on 7-under at Leopard Creek; credit GolfRSA.

England Golf National Squad player Chegwidden was flawless through four holes until an eight on the par-5 15th put the brakes on his round. The Orsett golfer recovered a shot with a birdie on the iconic 18th hole, one of the toughest holes of the day, and racked up three more gains coming home.”

“It was a really solid round, despite the little snowman on 15,” he said. “I donated a golf ball to the bush, but I hit a pretty good drive and good second or third or whatever that was into the green, and then had a three-jab for eight. But that’s golf, you know. Things like that happen and you just have to regroup.

“I am very happy with where my game is at. Seems like every time I’m paired with Christiaan Maas (SA’s No-ranked amateur), I lift my game to a higher level. Just need to keep it going now for two more rounds.”

Bob Geurts (71) from the Netherlands moved to fourth on three-under, Sam Simpson (71) is a further shot adrift and Adel Balala from Kenya and Scottish Golf National Squad player Jack Broun finished in a tie for sixth after carding 71 and 72 respectively.

The South African team retained their lead in the Team Competition, and courtesy of the Jarvis 65, a 72 from Jordan Duminy and 77 from Christiaan Maas, the GolfRSA Senior Proteas will start the final round with a five-shot lead over England.