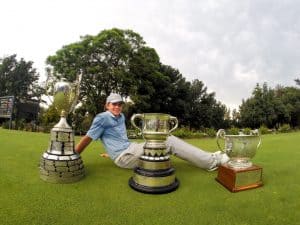 2 December 2021 – After a year of tournament wins and accomplishments unmatched by even the greats of South African golf to come before him, Casey Jarvis is the AmateurGolf.com Men’s Player of the Year.

The AmateurGolf.com Men’s Player of the Year is awarded based on a point system earned through performance in major amateur events throughout the course of the year.

The 17-year-old Jarvis established himself in 2020 as one of the brightest young prospects to come out of South Africa, and as a name to remember if he continues on his current trajectory.

When the year began, the GolfRSA National Squad member was 16 and poised for a breakout year after winning two amateur events toward the end of 2019. The winning continued into 2020, and it wasn’t just the just the fact that he was collecting trophies that was so impressive – it was the scores he was shooting.

At the Free State Open, Jarvis was 18 under for 72 holes, with only one player within 13 shots of his winning total. A week later at the Gauteng North Open, he shot 25 under to win by eight shots.

Think he was comfortable playing with a lead? In those two events, he closed with a 64 and a 63. 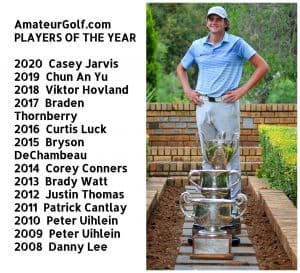 The next three events were the biggest amateur tournaments in Africa, with Europe’s strongest players competing with South Africa’s best.

In so doing he broke a record that had stood for 51 years, becoming the youngest winner (at 16 years, 6 months and 17 days) of the championship.

The next week, Jarvis got the double, taking the Aon SA Amateur Championship after six straight match wins including a decisive 7&6 result over James Wilson of Scotland in the championship match. He became the seventh player to achieve the double in 95 years, the first since 2007 and the youngest to do so.

The others were four-time British Open champ Bobby Locke in 1935 and Neville Clarke in 1989. 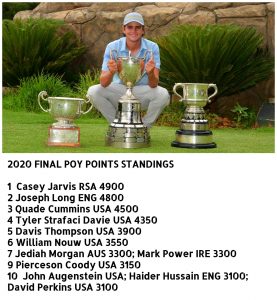 Jarvis also recorded two runner-up finishes and two other top fives in 2020, and his worst finish in an amateur event was 14th. In 38 rounds in amateur events, his stroke average was 69.03. In three European Tour events, he made two cuts. He also won three times on the IGT Challenge Tour, a developmental tour for aspiring South African golf professionals.

It bears repeating — he turned 17 years old mid-year. He is the first player not playing college golf in the U.S. to earn Player-of-the-Year honours since Curtis Luck of Australia in 2016.

Finishing as the runner-up in the year-long points race was British Amateur champion Joseph Long of England, with consistent high finisher Quade Cummins (Weatherford, Okla.) of the University of Oklahoma third.

Tyler Strafaci (Davie, Fla.) of Georgia Tech, who won the U.S. Amateur, North & South Amateur (joining his grandfather as champion) and Palmetto Amateur, was fourth, while Jones Cup Invitational champion Davis Thompson (St. Simons, Ga.) of the University of Georgia was fifth. Thompson is the only player to finish in the top five in 2019 and 2020.