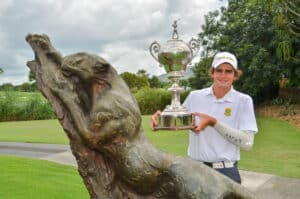 However, unlike the forceful style with which he reeled in the SA Amateur and SA Stroke Play calendar double and the Freddie Tait Cup in the SA Open in 2020, and his runaway victory in last year’s event at Glendower to complete the South African Swing trifecta, it was a measured and mature performance that landed Jarvis in the winner’s circle at Leopard Creek this week.

The 18-year-old curbed his naturally aggressive game to secure a big win on a course that has not been kind to him in the past.

His rounds of 70, 65, 68 and 70 saw him retain the title, but it was the manner of his 15 under par victory that was most satisfying for Jarvis.

“I’ve always struggled to score here, so I changed my strategy and I stuck to my game plan for four days. Today I played probably one of the most conservative rounds of my life,” he said. “I played away from the flags and took less club off the tee to make sure I kept it in play.

“It got a bit interesting in the last three holes when my lead was down to three, because three shots can change very quickly around here, but I’m glad I was able to hold on for the win. I’m really proud of myself for having finally conquered this golf course.”

Jarvis slept on a four-stroke lead and, after opening with two birdies and picking up another shot on the par-three fifth, looked to be cruising for a comfortable win.

His nearest rivals, however, had other ideas.

Premlall struggled on the opening nine but fired six birdies in seven holes after the turn to keep the heat on. A double bogey on the 17th derailed his charge but the 17-year-old showed his class with a closing eagle on the par-five 18th to finish on 11-under-par, ensuring a runner-up to Jarvis for a second straight year.

“I battled to hit greens over the first two days, but I slowly got into the groove and today was a good, solid round,” the reigning Nedbank Junior Challenge champion and 2021 Freddie Tait Cup winner said. “I went bunker-to-bunker on the 17th and messed up the hole, but I’m pleased with where my game is at, and it felt really good to get that eagle at the last.”

Meanwhile, new teenage sensation Aldrich Potgieter, fresh from an 11-birdie 65 in the third round, continued his blistering form on the last day.

The big-hitting 17-year-old opened with a double bogey but racked up seven birdies – including pairs on nine and 10, and 12 and 13 – to get himself firmly into the hunt. Regrettably the Pinnacle Point junior’s aggressive style cost him dearly on the final two holes.

Potgieter was born in South Africa but spent the last nine years in Australia. The family moved back in December and set up home in Mossel Bay. The new Louis Oosthuizen Junior Golf Academy inductee certainly made name for himself in his Leopard Creek debut, as he fired rounds of 72, 72, 65 and 71 to tie for third on eight-under alongside GolfRSA No 1 Christiaan Maas.

“The first two days were about getting to know the course,” he said. “I played really well in the third round to get myself into contention, and today I went all out to chase the leader. Unfortunately, I fell just short at the end. I wouldn’t change my strategy if I came back next year. It just took me time to adjust to the greens, but the last two days were fantastic.”

Robert Moran from Ireland closed with an even-par 72 to round out the top five on four-under.

Jarvis takes his good form into next week’s South African Stroke Play Championship at Randpark, where he won the event in 2020 with a record score on 25 under par.

“I played so nicely all week, and I built nice momentum and a lot of confidence, so yes, I’m really looking forward to getting back to Randpark and chasing another double.”