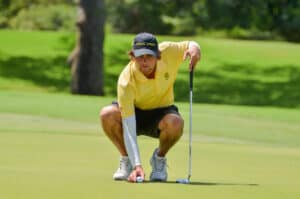 Defending champion Casey Jarvis continued to stamp his dominance on the African Amateur Stroke Play Championship and will take a four-shot lead into the final round at Leopard Creek Golf Club; credit GolfRSA.

16 February 2022 – Casey Jarvis continued to stamp his dominance on the African Amateur Stroke Play Championship after a brilliant third round of four-under-par 68 that saw him race clear of chasing pack with 18 holes to play at Leopard Creek Golf Club on Wednesday.

He quickly established himself as the man to catch with birdies at the second, fourth and sixth holes, and redeemed himself after a bogey on the 10th with an eagle on the par-five 13th. “Overall, I am playing well and scoring well, and minimising my mistakes. I still feel like I could be holing more putts, though,” Jarvis said.

“I missed a few makeable ones this week, but I’m not getting hung up on that. I am playing really well and shooting another low score out there today really helps to build confidence and keep the momentum going in the right way.”

The 18-year-old State Mines golfer was pleased to keep his title defence on track with his outstanding level of performance but is fully aware that even a four-shot lead of 13-under-par par cannot be taken for granted.

“I will have to go out there and play my best because there are a lot of class players in the pack chasing me. Someone could go low if they really get it going out there. I’ll keep my head down and just stick to the strategy that’s given me the lead so far.” 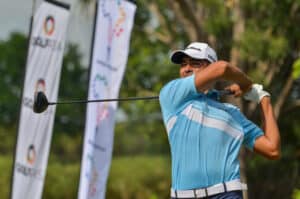 Realising he was about to be left behind, Premlall racked up a brace of birdies on five and managed to hold onto the leader’s coat tails with two more on the ninth and 11th holes. He picked up one more shot on the par-three 16th but three bogeys in the last five holes saw him finish the day on nine-under, four shots back.

“I played solid, especially on the front the nine, but I made a few costly mistakes on the home stretch,” said the 17-year-old Glendower junior and runner-up last year. “I will have to do better to try to keep a clean card if I want to gain some shots on Casey in the final round.”

It might look like a two-horse race between Jarvis and Premlall for the title, but neither player fired the low round on the day.

That honour belonged to 17-year-old Aldrich Potgieter, who was ranked the No 6 Junior in Australia last December before the family relocated back to South Africa after a nine-year stint down under. The Louis Oosthuizen Junior Academy member fired a blistering seven-under-par 65 that featured no less than 11 birdies to rocket to third on seven-under.

Jonathan Broomhead signed for 67 to finish in fourth on five-under, with South Africa’s No 1-ranked Christiaan Maas and Robert Moran, who both carded rounds of 66, a further shot adrift.