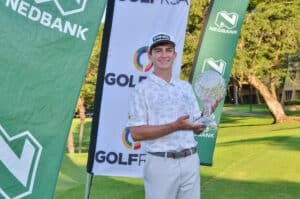 4 May 2022 – Stefan Jacobs soared to a three-shot victory in the Nedbank Junior Challenge, thanks to two sensational front-nine eagles at the Gary Player Country Club that helped the Randpark junior hold off a charging Aldrich Potgieter.

Potgieter has been on a sublime run of form over the past few months, having racked up three wins in his first three starts on the GolfRSA Junior circuit.

The Pinnacle Point junior looked set to add to his victory tally after firing six birdies in the first 10 holes of the final round to edge in front, but overnight leader Jacobs responded in sensational fashion, knocking in an eagle two on the par four sixth hole and then holing a 50-foot putt for eagle on the par-five ninth hole.

In what quickly evolved into a two-horse race, Jacobs kept things steady over the final nine holes while Potgieter went for broke. The 2022 GolfRSA National Squad inductee ultimately paid the price for his aggressive style with a double bogey on the 15th and a bogey on the 17th.

“I must admit I was nervous at the start of today,” said Jacobs. “I got a bit worried when I saw Aldrich charging but the two eagles were crucial as they really gave my round a lot of momentum and kept me level with him.

“I had no idea that Aldrich had made that double on 15. I was still quite angry with myself for a three-putt bogey on 14 so I played the 15th a bit more aggressively. It paid off because I hit it close and holed a six-footer for birdie.”

From there, with a comfortable three-shot lead, Jacobs knew it was a matter of playing conservative golf over the notoriously difficult closing stretch at the Gary Player Country Club.

His final round of two-under-par 70 saw him finish at thee under; the only player in the field to finish in red numbers. “I was just playing par golf coming in,” he said.

“I hit some great iron shots into the greens at 16 and 17, which took some of the pressure off, and then even though I was short of the green 18, I managed a good up and down for par.”

Jacobs, who won the Nomads North and South event in August last year, posted solid top 10s in his first two starts early in the season, but this is comfortably the biggest title of his career and boosted the 18-year-old to second in the GolfRSA U-19 Ranking behind Dan Bennett.

“It hasn’t really sunk in what a big moment this is for me,” he said. “It means so much though; to get it done against such a strong field, and on such a difficult golf course feels incredible. I’d love to use this momentum to get a few more good results, but it’s my matric year and have June exams to concentrate on so I’m going to take a little break from golf to put the academics first.”

In addition to the title and valuable world ranking and GolfRSA ranking points, Jacobs and inaugural champion Yurav Premlall will enjoy an exclusive VIP experience during the Nedbank Golf Challenge when Africa’s Major tees off from 10-13 November.

“That is going to be so cool,” Jacobs said. “We’re going to meet some of the best golfers in the world and get the chance to watch them prepare and play up close and personal. It’s going to be an awesome experience to learn from the best.”

GolfRSA National Squad duo Amilkar Bhana and Pascal Gunther shared third spot on one over, with Tristan Leonard in fifth. 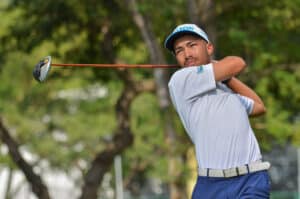 The second addition of the Nedbank Golf Challenge also produced some great results for the 19-strong South African Golf Development Board delegation, with Timothy Daniels and Lyle Pedro both posting top 10s and Vuyisani Makama from Gauteng – another new GolfRSA National Squad inductee – tying for 16th.

Daniels carded rounds of 70, 75 and 74 to finish in sole sixth on three over, an achievement that lifted the Boland junior to 12th in the U-19 Rankings. Pedro from the Northern Cape fired a closing 69 that tied the low round on the final day and finished in joint eighth on five over.

It’s an awesome opportunity for the SAGDB members to compete against the best juniors in the country, because it helps us to access our games and we learn a lot from them, especially about course management,” Daniels said.

“I am really proud of how I handled myself out there. This is the Home of the Nedbank Golf Challenge, so you expect to be challenged. The set up was really tough over the last two rounds. I learned a lot from competing last year, and I was able to apply the experience to perform much better.”