Izel Pieters claims in the Rose Bowl in KZN

The 2010 Rose Bowl finished dramatically yesterday at Kloof Country Club when Izel Pieters claimed the championship on the first play-off hole against Bonita Bredenhann. Earlier, the two had tied on 217, one stroke ahead of Connie Chen.

Teeing off in the final round of this 54-hole championship, the three girls were tied for the lead on 144. WGSA President Erica Lefson joined the group going down 16 when Izel was one over par, Bonita +2 and Connie +3. She reported that Connie sank her 10ft birdie putt to join Bonita on +2 but missed a further birdie putt at the par five 17th and an opportunity to tie the lead.

Connie and Bonita were on the green at the par three 18th with Izel 18 inches off the in the semi-rough. The unbelievable happened when Izel double hit her chip shot which finished two ft from the pin to give her a four. Connie was mortified to three putt herself out of contention, so Bonita’s regulation two putt put her into a play-off with Izel. 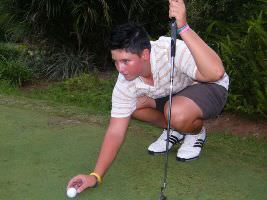 In the first play-off hole, the par five seventh, both girls missed the green with their second shots. Bonita’s bunker shot rolled over the green and she chipped back but two putted to lose the championship to Izel whose chip and two putts won her the title.

The 10 to 18 handicap division was won by Southern Cape’s Chandré Roberts on 247 with 10-year-old Eleonora Galletti tied in the runner-up position with Mieke de Ridder from Eastern Cape and Gauteng North’s Michelle Wears-Taylor, all on 252.

The 19 to 33 handicapped girls played 36 holes stableford. Cassidy Williams from Boland won the Bronze 19 to 25 handicap division with 80 points and 10-year-old Chiara Contamathios (Gauteng) was victorious in the Copper Division (26 to 33 handicaps) with 78 points.

Prizes were also awarded to players in age groups as follows: Under 12, Chiara Contamathios, Under 14, Cassidy Williams and under 16, Lara Weinstein. The 54 hole nett was won by Monique Ramkisson on 204 in the championship division and by Chandré Roberts in the 10 to 18 handicap division.

The 54 hole Nomads SA Girls’ Championship will be played at Orkney Golf Club from 25 to 27 April when approximately 150 girls will participate, including all those who competed in the Rose Bowl this week.