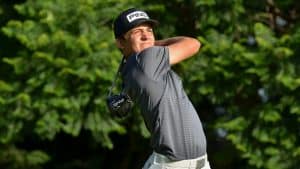 14 April 2021 – GolfRSA No 1 Christiaan Maas rekindled his remarkable love affair with ERPM Golf Club to push his title haul since competitive golf resumed in September last year to 11 with a one-shot victory in the North Final of the Bridge Fund Managers Junior Series this past weekend.

The reigning South African Amateur champion made the Boksburg layout his own last December when he fired seven birdies and an eagle in the qualifier for the 110th South African Open Championship to set an unchallenged target of eight-under-par 64.

A month later, the 17-year-old Pretoria junior once again underlined his credentials as one of the games future stars when he produced a grandstand finish to defend his Nomads National Order of Merit Inland title with a 12 stroke winning margin.

On Saturday, Maas fired rounds of 74 and 68 to edge out fellow GolfRSA National Squad member Amilkar Bhana in the North Final.

“Since the Covid-19 travel restrictions prevents us from taking the North and South Final winners to compete in the prestigious Junior North and South at Pinehurst in North Carolina this year, the six finalists knew they were playing for pride alone,” said tournament director Peter Little.

“Regardless, Christiaan and Amilkar made a fist of it and duelled to the end, and Christiaan certainly illustrated why he is rated the top amateur in South Africa, showing remarkable mental strength and a winning demeanour well beyond his 17 years.”

The youngster’s uncanny ability to dig in his heels and to find an extra gear in the face of adversity has become the signature of his well-rounded game and has kept Maas in the No 1 spot in the GolfRSA Open and Junior Rankings since February.

In a tight battle for supremacy in the 36-hole final against England’s Jack Dyer at Royal Johannesburg and Kensington Golf Club, Maas fired 13 birdies en route to a 3&2 victory for the SA Amateur title. In the final round of the Cape Province Open, he produced a final round 66 to deny local favourite Jordan Duminy a home win with a three-shot victory.

And in the North Final, he was four shots down to Bhana with nine holes to play, but when the talented Country Club Johannesburg junior had a lost ball on the par-four 15th, Maas pounced. Despite a wayward drive at the 16th, he hit a magnificent approach to three feet. The ensuing birdie led to a three-shot swing and he pressed on to victory.

Maas has certainly become a force on the amateur golf circuit over the last eight months and even left his mark on the country’s golf development tours, with two victories apiece on the IGT Challenge and Bushveld Tours. But perhaps most telling was his impressive Sunshine Tour debut in the recent Serengeti Pro-Am Invitational.

While having to attend school during the event, the Affies learner carded rounds of 70, 66, 62, 74 and 69. He not only made the 36-hole cut in the 136-strong field, but he bested some of the country’s leading professionals to tie for 32nd in the individual competition.

A promising future is certainly on the cards for Maas but, for the time being, the 17-year-old will look to keep his remarkable amateur winning streak going.