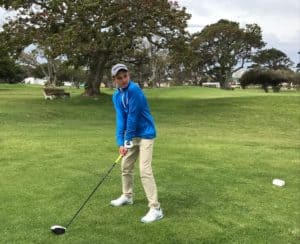 The 14-year-old Western Province junior displayed nerves of steel as he holed a monster putt at the first extra hole on the Montagu Course to defeat Michael Ferreira in a sudden-death play-off for his first national victory at Fancourt. We caught up with the Milnerton golfer during the South African Under-19 Inter-Provincial at Oubaai Hotel, Golf and Spa to find out more about his journey in golf and his goals for the future.

TELL US FIVE THINGS ABOUT YOURSELF THAT MOST PEOPLE DON’T KNOW
I play all sport right handed but play football left-footed
I play pretty much every sport that there is
I HATE flying. I can’t stand it, especially when you fly over water. I can’t stop thinking that something will go wrong and we will go down
I dislike ALL vegetables but love all fruit
I beat a professional golfer in a hacky sack competition – the first ‘kid’ to beat him!

STILL ON MY BUCKET LIST
I’ve always wanted to go to Venice, to see what it’s like to travel around in a boat

WHERE AND WHEN DID THE GOLF BUG BITE?
I would always go on the cart with my dad when he played. When I got bored watching him, my mum would take me around the course and let me hit a few shots. Between my parents, they got me started on my golfing journey.

WHO ARE YOUR ROLE MODELS AND WHY?
Tiger Woods, for sure. He has the best mental game of anyone I’ve ever watched. The way he came back and to win the Masters again was just unbelievable. Not very many people could imagine that he would even play again.

STRENGTHS AND WEAKNESS OF YOUR GAME?
The strength of my game is that I hit a lot of fairways, but the weakness is not holing enough putts.

BEST OR WORST TRAVEL EXPERIENCE?
My worst travel experience was flying back from The Open last year. We had booked our flights back to Cape Town the day before a Western Province tournament, but Emirates left my golf clubs in Dubai, so I missed the tournament.

TOURNAMENT OR MAJOR YOU WOULD MOST LIKE TO WIN
The Open.

WHAT SONG WOULD THEY PLAY FOR YOU AT THE FIRST TEE?
Uptown Funk – that was my first golf tour song.

WHAT’S YOUR FAVOURITE HOME-COOKED MEAL?
My mom’s macaroni and cheese!

THREE MUST-HAVE ITEMS IF YOU WERE STRANDED ON AN ISLAND?
Blue berries, Nutella and my cell-phone.

DESCRIBE YOURSELF IN ONE WORD
Dedicated.

WHAT DID YOU WANT TO BE GROWING UP?
A fireman, but over the years the fire hose was replaced with golf clubs.

WHAT WOULD YOU ASK FOR IF YOU WERE GRANTED THREE WISHES?
To live in Miami, to always be happy and 100 more wishes.

WHO WOULD BE IN YOUR DREAM PAIRING?
I’ve always wanted to play with Rory, so it would have to be him.

WHAT IS YOUR BIGGEST FEAR?
Losing what I have.

WHAT IS YOUR GO-TO CLUB AND WHY?
My 3-iron. I love it. I can hit it low, high, left to right or right to left…it’s the one club I trust completely.

WHAT ADVICE WOULD YOU GIVE YOUNGSTERS JUST STARTING THE GAME?
Practice, practice, practice. Don’t mess around on the golf course with our friends. Practice with purpose. And be patient with yourself, because it’ll pay off one day.