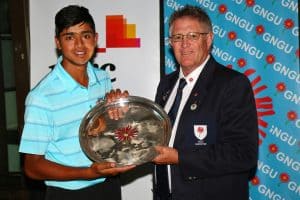 In the space of two weeks this October, GolfRSA National Squad member Yurav Premlall shot to 10th in the Junior Rankings following his breakthrough win on Sunshine Tour Junior Series in early October and 17th in the Open Amateur Rankings with his first success on the Open Amateur circuit.

But the 15-year-old Glendower junior announced himself well before his three-shot victory in the Cape Town Junior Open and his two shot triumph in the Gauteng North Golf Union Silver Salver.

First he chased fellow Ekurhuleni junior Casey Jarvis all the way to the finish line in the Nomads SA Boys Under-15 Championship at Kingswood in January.

A few weeks later, Premlall was still just 14 years old and the youngest starter in the internationally loaded field of the SA Stroke Play Championship upstage some of the country’s top golfers and some high ranking global talents with a top 13 finish at Pecanwood Golf and Country Estate.

Thanks to the Nomads South Africa and their annual series of junior events, Premlall was able to ease his way into national competition over the last two years. The experience gained not only showed in six top 10 finishes in seven starts on the junior circuit, but top five finishes in the Northern Cape, North West and Southern Cape Opens.

We caught up with Yurav after the Silver Salver to learn more about his golf background, his goals and dreams and his secret ambition to land a starring role in The Big Bang Theory.

TELL US ABOUT THE TIME YOU FIRST PICKED UP A GOLF CLUB
My dad used to play golf, so it started with the plastic set I got at around two years old. I progressed to a Little Tiger set.  We moved to Gauteng when I was five, and I was not handling the move well. I missed all my family in Durban. After work every day, my dad took me to the driving range. This became my coping mechanism. Later I joined SA Kids Golf, and now I am here.

WHAT SONG WOULD THEY PLAY FOR YOU AT THE FIRST TEE?
My House by Flo Rida

DO YOU SET YOURSELF GOALS AND WHAT DID YOU HOPE FOR IN 2018?
I had goals to improve my fitness, reduce my number of putts per round. I have come close to wins that have eluded me, and hoped to push through the barrier. I wanted to make the team for Italy again and I wanted to win a junior tournament.

WHAT’S YOUR FAVOURITE HOME-COOKED MEAL?
I have two favourites – Butter Chicken and Prawns, both with Paratha

WHO ARE YOUR ROLE MODELS AND WHY?
Barak Obama for his presence and demeanour. I loved his addresses because he never read, he always talks. Tiger Woods for his golf and charity work and Nelson Mandela for believing in a dream.

THREE MUST-HAVE ITEMS IF YOU WERE STRANDED ON AN ISLAND?
My cell phone, a knife and my lob wedge

WHAT TO DO YOU CONSIDER THE STRENGTHS AND WEAKNESS OF YOUR GAME
My temperament is my biggest strength, as well as chipping and recovery play. Course management is a weakness that I need to improve and I’m also working on my riving accuracy.

TELL US ABOUT YOUR BEST AND WORST TRAVEL EXPERIENCES AND WHY
It’s odd, but both best and worst experiences were on my two trips to Italy with the squad.
My best was 2018. Our return from Milan to Dubai was delayed, causing us to miss our flight from Dubai to Johannesburg. We got day visas and was able to tour Dubai. I was really pleased that Uncle David (Younge) and Theo (Bezuidenhout) was game and made the most of this opportunity.
My worst was 2017. This trip tested us from the beginning. Firstly, my un-abridged birth certificate was a problem. The department of home affairs didn’t have my birth info. Eventually, after numerous interventions, I got the certificate on the day of my visa appointment. My mum decided at the last minute that I was carrying to many documents. She did an affidavit and had copies made of their ID documents and I made the plane by the skin of my teeth.

TOURNAMENT OR MAJOR YOU WOULD MOST LIKE TO WIN?
The Open at St Andrews

DESCRIBE YOURSELF IN ONE WORD
Resilient.
I am driven to succeed in my goals and take setbacks in my stride.

YOU ARE SLOWLY TRANSITIONING INTO THE OPEN AMATEUR RANKS. HOW TOUGH IS THE SENIOR CIRCUIT AND WHAT ARE MOST DIFFICULT OBSTACLES TO OVERCOME?
For me, finding the balance between school and golf is crucial. The amateur circuit is demanding with time away from school. Also, the pressures of competing with so many talented guys.

WHAT DID YOU WANT TO BE GROWING UP AND WHY?
A soccer player. I always wanted to play for Manchester United or Real Madrid because it was something that I enjoyed.

WHICH TOURNAMENT IN SOUTH AFRICA WOULD YOU MOST LIKE TO WIN AND WHY?
I would like to win the SA Open, because it’s the biggest and most prestigious in South African golf.

WHAT WOULD YOU ASK FOR IF YOU WERE GRANTED THREE WISHES?
A Lamborghini
A mansion in Florida
To start a Foundation offering scholarships and aid to kids and families in need

DREAM FOURBALL?
My dad, Tiger Woods, Barak Obama, and me. I have been inspired by all of them and how awesome to have them all together.

WHICH ACTOR WOULD YOU PICK TO PLAY YOU IN A MOVIE ABOUT YOUR LIFE
Dev Patel would be a more realistic choice. He really impressed me in Slumdog Millionaire.

WHAT IS YOUR BIGGEST FEAR?
Crocodiles

WHAT IS YOUR GO-TO CLUB?
Lob Wedge

TELL US SOMETHING YOU ABSOLUTELY HATE TO DO
Washing cars

IF GOLF WASN’T AN OPTION, WHAT ELSE WOULD YOU PURSUE AND WHY?
I would go for acting. Allows one to explore different characters and situations. The show I would love most to be in is The Big Bang Theory.

WHAT ADVICE WOULD YOU GIVE YOUNGSTERS JUST STARTING THE GAME?
My advice will be to enjoy the game and have as much fun playing because if they want a career of it you must love what you do.