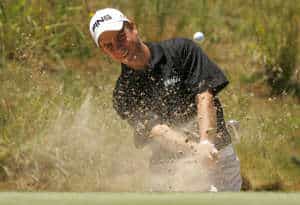 Louis, your first round over; did the wind bother you some?

Yes, it did blow quite a bit, but it mostly affected us on the greens. On the sixth hole, the wind actually rolled Ernie’s ball across the green. It was mostly okay.

Do you know this course?

I came here a few months ago and played two rounds and again, two practice rounds, so I have played it five times now. It’s quite long, you have to bring a lot of patience and a hot short game.

Playing with Ernie this morning, how nerve-wracking was that?

Man, I was nervous on that first hole. I don’t know what was worse – the fear of hitting a freshie or playing with Ernie or all the people standing there waiting for us to hit. But after the first hole, actually after the first shot, I was fine.

It was great to play with Ernie; you can learn so much from him. But to be honest, when you playing, you focus on your own game, plan your own route. I caught his shots here and there, but I concentrated more on what I was doing out there. My short game was really good, especially the short stick. Yes, the putter was really hot. I thankful that my long-game held up well under the pressure.

You won the SA Amateur Open – is it important to win the leading rookie at the SAA Open?

Yes, definitely. If you look at guys that have done if before me, like Trevor Immelman, it’s something I would like to win. In fact, it’s one of the goals I set for myself coming here. I really would like to get that title, even if it’s just an honour-thing.

What are your plans for the future?

I have entered the Sunshine Tour’s Qualifying School, so I will see how I measure up here this week against the professionals and how I go at Tour School before I make up my mind.

I went to the UK to play in the British Amateur and I was shocked at the gap between here in South Africa and over in Europe. I think you need to be clever and take things one-step at a time, instead of running headlong into a wall.

I’m not really interested in going to the USA to play college golf, so I think I would like to follow the route George Coetzee and Neil Schietekat are following – stick to the Sunshine Tour and learn the ropes.

I am not in a hurry. I want to take it in stages; I think that way I will have a better chance of making it to Europe or the PGA Tour and deliver more consistent results.

Courtesy of the Sunshine Tour