International Team Competition could be a closely contested affair

The International Team competition being played as the same time as the 36 hole Qualifying Round, of the Glacier South African Amateur Championship, could turn out to be a closely fought affair.

Ten countries are participating, each represented by two players. The lowest aggregate of the two players’ 36 hole stroke play scores will determine the winning team. Entries have been received from France, Finland, Canada, Uruguay, Mauritius, India and neighbouring countries.

The Qualifying Round is being played at Benoni Country Club, Ekurhuleni, on Sunday and Monday 1 and 2 March 2009 respectively.

The South African team will be made up of local Ekusrhuleni amateur Dean O’Riley and Western Province’s Adrian Ford. The two make a formidable pairing in that Dean O’Riley is certainly South Africa’s inform amateur on the local circuit at the moment. The 19 year old Benoni Lake Golf Club member last month won the Gauteng North Open and last week bagged the Free State & Northern Cape Open title to move to the top of the South African Golf Association’s (SAGA) latest Player Rankings. 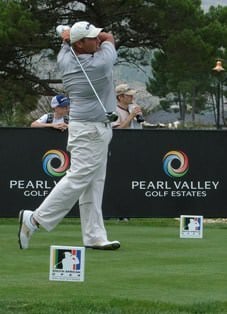 22 year old Adrian Ford, of Durbanville Golf Club, has been a steady competitor over the last six months, he is ranked 2nd on the latest SAGA Player Rankings. He has had three top ten finishes on the local amateur circuit this year, his best showing being a 2nd place in the Kwazulu Natal Open.

The two Canadians appear to be a formidable pairing. They are Lindsay Renolds and Mathieu Rivard. The former is highest ranked, of the two players, on the World Amateur Golf Rankings (WAGR), at 240th. However the biggest challenge facing these two players is that they are likely to be coming off a cold and wet winter and maybe short on match practice.

France has selected two young players in Edouard Espana and Mayel Oueld Es Cheiku. These two players faired best of the eight young French golfers in the country at present, in the Portuguese Amateur played last week. They finished 19th and 24th tie respectively. With the extensive international experience the French players enjoy, they are the team most likely to be near the top of the leaderboard come the final round.

Last year Wales won this event with a score of 291, three over par, which was played at Royal Durban Golf Club. They were represented by Nigel Edwards and Craig Evans. The Welsh have not entered a team this year.

On Wednesday 2 March, the match play commences, each match decided over 18 holes, in which there will be 32 matches. The following day 16 matches will be played in the morning and 8 matches in the afternoon. Thursday will see the quarter and semi finals played in the morning and afternoon respectively. The final of the match play will be played on Friday over 36 holes.