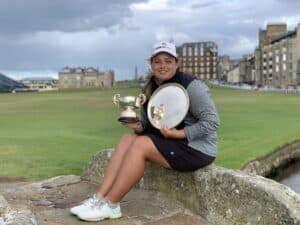 The 18-year-old from Bloemfontein had risen to No 1 in the GolfRSA rankings in April and enjoyed her first national success in the Nomads SA Girls Championship at Sun City in July, but she had not been tested on international soil since she competed in the Optimus Kids and US Kids events in the United States as an 11-year-old.

Playing three of the daunting links courses at the Home of Golf, Venter not only won the Stroke Play Qualifier by five shots but marched to a brilliant victory in the Match Play competition.

In so doing, she becomes the first South African winner since the event launched in 1989. Her victory was made all the sweeter because the final two rounds of the Match Play were played on the historic Old Course at St Andrews.

“To play the Old Course was a dream come true for me,” said Venter. “And to win a tournament here is even sweeter. I am so proud to have been able to stand on the Swilcan Bridge with the trophies in my hands.” 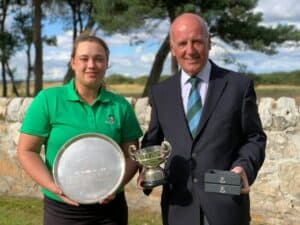 Venter came into the event in fine form after her stunning play-off victory at the Gary Player Country Club, but the Free State junior had precious little links experience ahead of a trip to the Home of Golf.

Asked how she prepared for the challenge, she responded: “It’s winter in Bloemfontein, so the courses have been playing very hard and it made preparation for links golf a little easier. I was able to practice my bump-and-run shots and putting from off the green – and these types of shots stood me in good stead at St Andrews this week.

“We have also had a squad camp at Atlantic Beach in Cape Town, which helped prepare me for the wind. My GolfRSA National Squad team-mate Kyra van Kan and I had practice rounds of the Eden and Strathyrum Courses, which helped a lot. I learned so much about course management this week; knowing when to hit my driver and when to take a 3-iron and play for position.”

Nerves certainly came into play in her first international event, as Venter proved to be a bit of a slow starter, falling behind early in each of her first three match play rounds. Yet her powerful drives and superb scrambling ensured plenty of birdies were on her cards and, ultimately, she closed out her matches by the 16th hole.

Playing the Old Course blind in the semi-final round, Venter edged out England’s Saskia Owen 3 & 4, but she got off to a much better start in her second trip around the Grand Dame, racing to a 3-up lead after three on the famous old layout.

She shook hands with England’s Katie Stephens on the 15th green after winning 4 & 3.

“It was a relief to get a par and an early win in the final,” she smiled. “Then I felt I could relax a bit. Katie was a great competitor, and I knew she would come back at me after that early lead, but I hung on and tried to make sure I kept making pars to put her under pressure. I was also relieved that I managed to finish up before the Road Hole each time.” 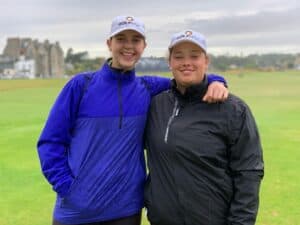 Venter and Van Kan hope to use all the experienced gained at St Andrews to good use when they tee it up at another iconic Scottish links layout – Carnoustie – in the R&A Girls Amateur Championship this week.

“We are really looking forward to the Girls Amateur,” said Van Kan, missed just missed out on qualifying for the match play stage, but finished fourth overall in the St Andrews Junior Ladies Open Stableford.

“Irrespective of the results, the opportunity given to us by GolfRSA to come out and compete in these two events is incredible. We have gained so much experience and I think we both learned a lot about ourselves in the process and identified areas we need to work on. It’s been an awesome experience so far.”

Venter’s victory was the fourth for GolfRSA in the United Kingdom in the last two months, following Aldrich Potgieter in The Amateur, Jono Broomhead in The Amateur Stroke Play Qualifier and Christiaan Maas in the Brabazon Trophy.