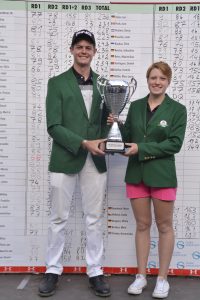 He beat a top international field to bag his second Global Junior Golf Tour title on Sunday, but instead of celebrating his RB German Junior success with mates, the first thing Wilco Nienaber did after a 14 hour flight from Germany and a three hour road trip from Johannesburg to Bloemfontein was to dash off to see his coach.

“I had a session scheduled with coach (Quintin Williams) and I wanted to talk about some things while they were still fresh in my mind,” said the 17-year-old Grey College learner.

Unusual behaviour for a teenager, but the GolfRSA National Squad member is not your average teenager.

When Nienaber lifted the Nomads SA Boys U-15 title in 2015, his booming drives, deft touch around the greens and diligent work ethic caught the attention of the local golf pundits, but a growth spurt of nearly eight inches (20 cm) threw him off the radar in early 2016.

He was back to his best in July after making some adjustments to his swing and added the Nomads SA Boys U-17 title to his growing tally, but the golfing world really took notice when he drove his way into the lead at the Curro SA Juniors International in March.

The Bloemfontein junior was in a class of his own as he outdrove international and local competitors with tee shots of 355 metres. With an equally lethal short game, he needed just one extra hole to beat defending champion Garrick Higgo for the title.

His first victory on the Global Junior Golf Tour earned Nienaber an invitation to the second.

From 19-21 May, the Free State Tsunami astonished his fellow competitors as he blazed his way around the par 70 layout of the GolfClub Hofgut Georgenthal with rounds of 69, 70 and 73.

Despite a triple bogey on the final day, Nienaber won by four shots on two over 212 from Roman Kumpost from Czech Republic, who fired a course record 68 in the opening round.

“The tournament was so well organised and the course was a real challenge,” he said. “I am incredible thankful to Erica Lefson for negotiating the spot for the Curro SA Juniors winner, because it was an unbelievable experience play against the top juniors from all over the world.

“And I have to tell her that our Curro SA Juniors International ranks right up there with the RB German Junior as two of the best events I’ve ever competed in.”

Rated as one of the top 10 most difficult courses in Germany, Nienaber said that course management was the key to his victory.

“It’s a relatively new course, so the greens are still quite hard,” he said. “You had to play strategically, because you couldn’t go for the flags. With so much slope, you can’t stop the ball off the slope. You had to be on the right side of the flag to have a birdie chance.”

Nienaber eagled the first hole in the first round, a feat he didn’t particularly like.

“I like to make an eagle when I’m up against it, so I didn’t really know what to make of that eagle; I saw my dad on the back of the green give a clap and I just hoped it was a good sign,” he said.

“The air was heavy in the rain in the first round and I made a stupid mistake the ninth. I hit three-wood – the same club I used in the practice round – and I came up short in the hazard. Then I hit it in the water around the green. Definitely not my finest moment.”

Nienaber was one behind Kumpost after the first round and expected to be a couple back after the second, but ended up leading by five shots.

“The greens sped up through the tournament and they were tricky; they particularly fast on the final day,” he said. “I birdied the first and had a soft drop at eight, but at 10, I fluffed my chip from 65 metres. I am embarrassed to admit what caused that bogey. Another not-so-fine moment.”

He parred the next three holes and pulled seven shots clear with a birdie at 14.

“Then came the seven at 16,” he said. “The fairway is split by a hazard, with out of bounds on the left of the left fairway and the 17th fairway next to the right fairway. For the last round, the 17th was also out of bounds.

“It’s a challenging tee shot with two tight fairways and my tee shot landed just on the 17th fairway. I had a huge lead, so the triple bogey didn’t matter, but it was annoying to put seven on my card.”

Nienaber closed with a great drive down the middle, a precision approach that caught the uphill slope on the right of the green and shot the ball in the direction of the cup and two putts for the win.