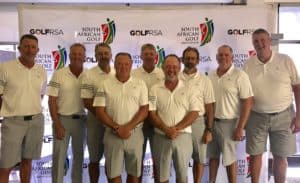 26 April 2018 – Some epic clashes are on the cards in both the senior and super senior divisions as the third round of the SA Senior B Inter-Provincial wrapped up at Pecanwood Golf and Country Club on Thursday.

The Senior Division title-fight is poised on a knife’s edge after Mpumalanga mowed down Free State, Border just managed to edge out Northern Cape and Boland sounded a resounding warning when they routed Limpopo 10.5 – 1.5.

Mpumalanga downed Free State 8 – 4 to move into the number one spot on the grid, but only the narrowest of margins separate the side from Border in second.

After the Foursomes ended in a 2-all draw, Herman Adendorf, Kobus Clarence, Sarel van Heerden, Brian Naidoo and Steve Smit piled on the points for Mpumalanga. Anton de Bruto and Daniel Nyathela halved their games to secure the victory.

Border went 1 – 3 down in the Foursomes, but Denis Jones and Norman Phillips squared the match in the first two games in the Singles.

Anton Boyce and Hugh Bezuidenhout gave Northern Cape the edge again, but Ant Traub, Ben Jonas and Jakkie Visagie racked up three wins in a row to give Border a one point lead. Duncan Neill halved against Frans Smith to guarantee a 6.5 – 5.5 win.

Meanwhile Boland carried a 3 – 1 lead into their Singles against Limpopo.

With promotion on the line, expect fireworks at Pecanwood as the three leading teams will go head-to-head in the final round.

Border will head into the final round of the Super Senior competition chasing Boland for the coveted promotion in the SA Senior B-Inter-Provincial at Pecanwood Country Club; credit GolfRSA.

The log leaders defeated Free State 3.5 – 2.5 to take the top slot in the log on six points, but Border is just two points adrift after knocking out North West 4 – 2. Both teams have 10.5 games points.

Boland will take on North West and Eastern Province in the final round, while Border will go all out to score a double victory over Free State and Northern Cape.

SENIORS B DIVISION RESULTS – Round 3