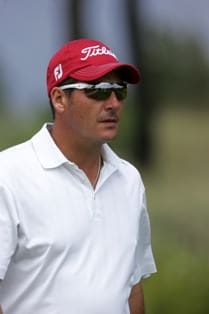 EAST LONDON, 2 March 2010 – Match play always dishes up its fair share of surprises and the third round afternoon matches of the 108th Glacier SA Amateur Championship at East London Golf Club was no exception.

Against strong odds, it was the inland players who got the upper hand and defied the nearly 50km/h strong North-Easter to reign over their coastal rivals and advance to the quarterfinals. Central Gauteng’s Allen Versfeld, Danie van Tonder and defending champion Ryan Dreyer, Ekurheleni’s Dean O’Riley and Rae Mackie of Northern Gauteng booked their berths alongside England’s Laurie Canter and Calvin Pearson and Wesley Baptiste of Kwazulu-Natal.

“I was really surprised to see how well we’ve done, given how the wind was blowing today,” mused Van Tonder, who stayed true his nickname, ‘Thunder’, by bashing his way past Dylan Keylock.

The young gun is relishing the experience of playing in his first national amateur championship and giving his fellow competitors food for thought by booming his driver off most tees and even off the deck on the par fives.

“I feel comfortable with the driver and I’m confident when I hit it,” Van Tonder said. “I hit it straight and I’m never in trouble, so why should I use an iron if the driver works?”

The 18-year-old has enjoyed a meteoric rise in the amateur ranks since he committed to the South African Golf Association’s schedule full time last July. Currently ranked number two in country, Van Tonder vaulted to 14th in the world amateur rankings after four top 10 finishes this season, including third places at Princess Grant, the KZN Open and the Free State and Northern Cape Open.

Although Trevor Muggeridge took him to the final hole, Van Tonder knocked off Donavan Pearce 6 & 5 and produced another positive result, a 5 & 4 win, against Keylock.

“It was a good match,” said Van Tonder, who was eight under after his morning match with Pearce and finished his afternoon match at seven under. Two-up and in good shape at the turn, he tacked on two more birdies at 11 and 12 and sent Keylock packing with his eighth birdie at the 14th.

“Dylan was playing very well, so I had to make my putts count to pull it through, but it was a tough match. It’s my first SA Amateur and I’m happy with my progress so far,” he said. “I think the match against Trevor was good, because it was a long match and it gave me good boost. I’m also not dropping shots, which is important at this course.”

Versfeld dispatched Kwazulu-Natal’s Jared Harvey 2 & 1. The 19-year-old from Wanderers, who lost to Canter in the play-off for the Proudfoot Trophy, finished his game at a tidy five under and said he was ready to face Dreyer in the quarterfinal.

“I’ve had a couple of tough games so far and I feel focussed,” said Versfeld, who bears an uncanny resemblance to PGA Tour professional Tim Clark off the tee. “I haven’t played him yet, but Ryan has a reputation as a tough competitor, so I expect our game will go the distance.”

O’Riley and opponent CJ du Plessis amassed a dozen birdies between them through the first six holes, but mistakes from the Limpopo golfer left the door open for O’Riley, who converted for points and closed the door on Du Plessis at his 40th hole of the day.

“I’m not the sort of player who wins by great margins,” said the reigning SA Stroke Play champion. “My matches tend to run to the closing holes, but I never give up fighting. And against Danie in the quarterfinals, I think it might even go into extra time.”

Dreyer called his match against Conway Kunneke a close shave, but his tenacity held out to force the win at the 18th. “It wasn’t my best start,” said Dreyer. “I was two down after three and hit a couple of loose shots. I had a couple of three putts and donated a few holes but when I got it to one down through six, I played solid.

Dreyer is known to be at his most tenacious in match play, a trait that saw him chip away at Adrian Ford’s lead in last year’s 36-hole final. “I never panic when I’m one down; I just bear down. I never give up,” said the 37-year-old. “At 16 I holed an eight-footer to stay one up and we halved the 17th. I thought I hit a pretty decent shot at the 18th but with the wind, it was too far left and I was in some very thick rough.” Dreyer punched it out best he could, but was still 50 meters from the green with Kunneke on the green in two. “I pitched it to about 15-foot and when I looked at the line, I told my caddy with is the putt we’ve been waiting for. When it dropped dead the middle, I promise you, I tingled all over.

“It wasn’t my best golf, but sometimes you get a little lucky along the way.”

Meanwhile everyone is wondering who will stop the cantering Englishman.

Canter evicted Justin Levy 7 & 6, eliminated Bryn Flanagan 6 & 4 and, in what he called his toughest match to date, took care of business with a 3 & 2 win against Cobus Oosthuizen. “Cobus is a great wind player and he threw a lot of tests at me,” said Canter. “We were very even over the front nine, but I was able to get the edge on him at the 10th. It was a big relief to get through today, because it was two very tough matches.

“This afternoon was comfortably the hardest match I’ve had; I had to really knuckle down and not give Cobus anything. It was a big relief to roll in that birdie at 16 and have it done with.”

In the last match of the afternoon, Rae Mackie got a 1-up win over Francesco Laporta to set up his quarterfinal match against Pearson.