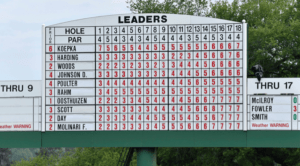 I was recently conferring with the Sports Editor at Business Day about content and timings when, at the close of our discussion, he said “goodbye”, adding the wish that I “stay negative”.

Being ‘under par’ or in red numbers on a leaderboard is the perfect scenario for golfers, but with COVID-19 stalking the fairways, this concept takes on an alternative and very unpleasant connotation.

I am still looking for answers and definitive responses to help me understand whether, in closing down the world’s economies, the cure could eventually prove to have been be worse than the disease itself.

That said, whatever the outcomes, these choices have been made and now we must all live through it as best we can.

It is all rather like playing a round and having a quadruple bogey on your scorecard, but needing to ‘suck it up’, play on and complete the round.

We golfers understand, more than most sportsmen due to the game’s extended playing time between shots, the need to come back into the moment with every individual shot and play one hole at a time. All of this without thinking ahead, however tempting this might be – which is a bit like crossing bridges only when you get to them.

Expanding this scenario in a business context, venues and businesses that have built up some fat will have the chance to weather the storm and resume trading. Those without this type of prepared contingency are going to really struggle.

In the broader context of the golf business, although The Golfer’s Club is one of the largest high street golf equipment retailers in South Africa, it also operates under the same rules and pressures as everyone else.

As the group’s CEO Jason Rowe commented to me, very few retail businesses can survive 21 days without generating any direct retail revenues.

I’m sure that at one end of the spectrum the board of Edcon, along with those of a number of other JSE-listed entities, would support this analysis, while at the other so would every informal trader now living under what is effectively house arrest.

Jason’s challenges are amplified by the need to look after staff, manage the finances in the absence of cash flows through the stores and keep open lines of communication with customers, his bank, suppliers and property owners.

For its customers, Golfers Club is offering online retail therapy to its database with great online specials, which will be delivered after the lock down restrictions are lifted – so even if you are stuck indoors you can still ‘shop ‘til you drop’!

Of course, Jason’s negotiations with his landlords and bank will mirror similar discussions throughout the country and across the entire business spectrum.

It will be interesting to see, at the back end of this crisis, whether the financial institutions played ball and middled it down the fairway or shanked it out of bounds!

In these circumstances (and if COVID-19, or any other virus, could think) the financial institutions have the same dilemma as many viruses and parasites – should they invade the host and just kill it, or keep it alive to prolong their own existence?

Away from the high street, Pecanwood’s golf course is closed, like all clubs in South Africa, but Morne Botha, Kevin Wylie and their teams need to keep the maintenance programmes going and protect what will be many estates’ most significant asset: the golf course.

Another key activity has been in making sure that the annual membership subscriptions invoices are followed up and the fees collected.

Another task is to keep in touch with both residents and members. The management team has a daily online meeting with Pecanwood’s board to keep abreast of developments within the estate, ongoing management requirements and to focus on the impact of COVID-19.

The latter’s impact is being assessed both in terms of the current effect on immediate business, the outlook going forward and how to build larger reserves for future unforeseen challenges, such as those that have been posed by the decisions made to combat the pandemic.

However, survive is what we must do or, despite all the precautions and adopted protocols, the virus will have won, not because of its own activities, but due to the decisions that have been made to combat it.

The loss of trade will be very serious for those clubs that are marginal, or at which the business model is imbalanced, which unfortunately applies to too many facilities.

In general, the public sees golf as a rich sport, and all clubs as luxurious temples occupied by super-rich acolytes.

Sadly, this is far from the truth, which is much more prosaic, as many clubs are non-profit entities. Their focus is to balance their books at the end of every financial year, reinvest any surplus generated in capital improvements and move on to the next.

Adding to these difficulties, has been the golf business’ reluctant grasp of the fact that it is in the ‘hospitality’ space, in which golf is merely a part of a much broader menu.

Facilities that have both embraced the hospitality ethos, and understood its requirements, will have more balanced and broader based business models. In all probability, these venues will be full of members and patrons, as soon as the lockdown requirements are relaxed, even if the golf course rounds’ count takes a while to get back up to a full head of steam.

There are of course also those venues, which ‘think’ that they understand hospitality.

This grey area was brought into very sharp focus earlier this year when I visited a golf estate where I was previously a homeowner.

The newly installed director of golf was very proud to update me on all the developments and changes. He was especially pleased in describing the turnaround at the estate, which he described as now being a ‘customer centric, lifestyle venue’.

It is said that pride comes before a fall and so what transpired, when I decided to stay on and eat the ‘99’ lunch time special, in one of the restaurant areas, should have come as no real surprise.

The day’s ‘special’ included a glass of wine or a beer with the choice of any lunch item.

As I do not drink alcohol, I therefore requested a soft drink as an alternative. Soft drinks are less expensive (especially those served from the mixer taps); although the agreed deal with the brand partner / supplier might not have factored in non-drinkers, which is a serious tactical business error in itself in this health-conscious age.

In response to my request, I was told that this substitution would not be possible. As a result, my lunch companion drank two glasses of wine and I paid for a cold drink.

I wonder if Secretariat would still be considered the great racehorse he was, if he had fallen as spectacularly in the first of his Triple Crown races in 1973 as this club did, in hospitality terms, at the very first turn?

Are all of these types of service misses and gaffes deliberate or conscious? Definitely not, but they do clearly highlight the gulf that needs to be bridged by the golf business, in order to retrain its incumbent staff and or to employ specialists, so as to get itself truly into hospitality mode.

A golf-centric trading environment, coupled with the non-profit ethos, makes many clubs, in effect, subsistence-level concerns. As such, they are going to need the complete support of their members and suppliers at the end of this period to get back onto an even keel and back into golf’s red numbers, and so avoid being very under par for all the wrong reasons.

John Cockayne has been a Professional Golfer since 1977 and is a fully qualified founder member and Life Member of the PGA of South Africa. He is a former Head Professional at Royal Oak, State Mines and Benoni Country Clubs and Director of Golf at Southbroom, during which period he was involved in the organisation of golf tours, numerous professional and amateur tournaments and as a consultant on the Sunshine Circuit.