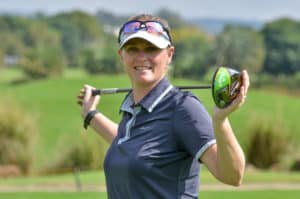 29 October 2019 – In-form Vicki Traut will headline a glorious festival of golf when the SA Women’s Mid-Amateur Championship swings into action at the magnificent Selborne Golf Estate, Hotel and Spa from 11-13 November.

Traut romped to victory in the 39th Ackerman Championship on the Open Amateur circuit two weeks ago and she is relishing the chance to bid for victory in the women’s mid-amateur flagship event at the course that launched her golfing career.

“It is very exciting to head back to the course where it all started for me,” said the 38-year-old Traut.

“My dad tried to get me into golf when I was young, but I was into a lot of sports and only played for about six months before I lost interest. I was around 22 and seriously into running when my dad begged me to be their fourth in a tournament at Strand Golf Club.

“I shot a pretty decent score and shortly after, I joined my mom, dad and brother on a mini-golf holiday to KwaZulu-Natal. The first course we played was Selborne. It was during that round of golf that the bug bit and I decided to start taking golf seriously.”

Traut broke into the top 10 within a year and was mixing with the country’s top amateurs at the time, including the 2006 World Amateur Team Championship winners Ashleigh (Simon) Buhai, Stacy Bregman and Kelli Shean.

“Then almost everyone in the top 15 turned pro. I also thought about it, but my husband Richard got a job offer in the Netherlands. I found out that they had a very competitive amateur circuit, so I played the Dutch amateur circuit until my first son was born,” Traut said.

She played a pivotal role in the GolfRSA Protea team’s success in the Regional All-Africa Challenge Trophy (RAACT) in Lesotho two years ago and over the last two years, the six-time Erinvale women’s club champion has been a key contributor to the Western Province A-team, who lift the SA Women’s IPT title in 2017 and was the runners-up in 2018 and 2019.

“I was in two minds about entering for the SA Women’s Mid-Amateur, because it falls right in the middle of exam-time for my kids, but the win at Strand definitely gave me a push,” said Traut, who ranks sixth on the GolfRSA Mid-Amateur standings.

“Beating some of the country’s top ranked amateurs to win one of my favourite championships was a huge confidence booster. My husband has always been hugely supportive and he encouraged me to play, so I am very excited to tee it up next week at Selborne.”

The 2019 SA Women’s Mid-Amateur has drawn the biggest field since 2012 with 97 entries and the Championship Division will be highly contested, however, reigning number one and defending champion Liezl Smit, who has been a dominant force on the Mid-Amateur and Open Amateur circuits, will miss out on her title defence.

“Unfortunately my husband entered us for an event in Portugal before the dates for this year’s championship was confirmed,” said the Vryheid pharmacist. “I am really sad that I won’t be able to defend. There is a group of new players that have come through the ranks going up against experienced past champions on a very challenging layout and I think the Championship Division will go right down to the wire this year.”

The power-packed line-up features all three former champions – four-time winner Sandra Winter, two-time champion Vanessa Smith and Sonja Bland, the winner in 2013 – while Nina Grey, who has risen to third in the rankings on the back of three victories this season, could pose a serious threat.

Selborne’s Michelle van der Merwe will spearhead the local challenge in the Silver Division, which has drawn a field of 46 players, while 35 competitors will battle for glory in the Bronze Division, including defending champion Rosa-Linda Wessels from Durbanville Golf Club.

Players over 50 at the start of the tournament will challenge for the Senior Trophy. Watts from Services took the honour last year with a staggering 10 shot victory at Krugersdorp Golf Club.