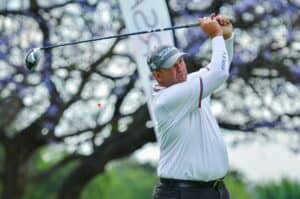 20 October 2021 – Neil Homann put his bid for a unique South African amateur triple into motion when he raced into the lead of the SA Senior Amateur Championship on Wednesday.

The 51-year-old Bryanston golfer fired a two-under-par 70 in the opening round at Glendower Golf Club and was the only player in the 143-strong field to post a sub-par round.

Homann won the SA Stroke Play in 1994 at Royal Cape and the SA Mid-Amateur Championship at Vaal de Grace in 2012. Now he is looking to add the country’s premier senior title to his collection.

Winning the triple became a target when Homann joined the senior ranks last year, but the GolfRSA Manager: Operations, Rules and Training didn’t come into the week with high expectations.

Since the pandemic forced GolfRSA to cancel many of its national events in 2020, this year has been exceptionally busy for Homann, and he is still struggling to get back to full strength after being struck down twice by Covid-19 in the last 12 months.

“To be honest, I haven’t given my game the attention it deserves,” he said.

“In fact, just last week we hosted the SA Mid-Amateur Inter-Provincial at Elements Private Golf Reserve in Limpopo. Game time has been limited and I didn’t even play a practice round. It was a really nice surprise to get the driver and putter going today to get a competitive score on the board.”

He got off to a perfect birdie start but gave shots back at the next two holes.

“The 10th is a really tough opening hole,” he said. “I hit a really good tee-shot and hit it to six feet and made the putt for birdie, which was nice to settle my nerves. I followed that up with a soft three-putt on the next hole and dunked it in the water off the tee, but I made a good five there. Then I holed a long putt on 13 for birdie to get myself back to level.”

Homann attributed his round to good shot-making.

“From the 14th hole I hit lots of fairways and greens, made a couple of good saves, but also I had couple of three-putts. I three-putted from the front of the green on the second for par, and the fifth for bogey, but I made some clutch putts for pars, and I managed to put one really close on the last hole.

“All and all, the putter worked, mostly, and I hit the ball nice and solid.”

Homann had high praise for the Glendower green-staff on presenting a pristine course.

“I play Glendower quite a lot and we’ve run a lot of golf tournaments here, so I have to say thank you to Glendower for always presenting us with a great course,” he said.

“It is a little harder than normal since they haven’t had that much rain here, but it’s running out a little bit and that helps if you play short.

“The course was obviously set up for seniors, with a good mix of forward and back tees, and some tight and some medium pins. It was quite nice, playing the course a bit different to what I normally experience. The greens are running nice and smooth, and the course is very neat and tidy. Even my playing partners commented on the neatness and attention to detail here, so well done once again to Glendower.”