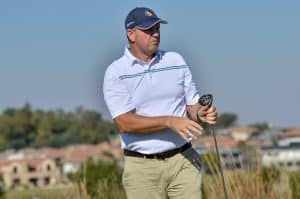 1 May 2019 – The pressure mounted during round two of the South African Mid-Amateur Championship on Wednesday, where former champion Neil Homann made a strong case for a repeat victory at Ebotse Golf and Country Estate.

Homann, the winner at Vaal de Grace in 2012, bookended his level par 72 round with bogeys, but a trio of birdies moved the Bryanston golfer one shot clear on a jam-packed leaderboard.

The 49-year-old overcame a bogey start at the 10th with a birdie at the next hole and parred his way to the turn.

He made a birdie start on the back nine to go one-under and cancelled a bogey at the fourth with a birdie at the par five fifth, but surrendered a final shot at the closing hole to lead the field on one-over 145.

Hardus Schoeman from Limpopo and Gauteng’s Shaun Stapleton, who came close to the winner’s circle in the flagship event at Silver Lakes in 2016, also went around the challenging Links layout in 72 strokes to tie for second.

Defending champion Derek Scullard will also be in the mix in the final round.

The Mount Edgecombe golfer had a double bogey at the par five 12th and was three over at the turn after dropping a shot at the 16th hole, but birdied the first to get one shot back. He dropped two more shots at the third and fourth holes, but an eagle at the par five seventh for a two-over 74 will see Scullard start the final day just two off the pace.

Kevin Sharp and Mark Beattie carded respective rounds of 73 and 70 to finish on four-over.

The Central Gauteng pair share fifth with Gauteng North duo Danie Viljoen and Louis Jonck, who both registered rounds of 74.

Rowan du Preez and Lawrence Joubert gave the home crowd something to cheer about when the pair finished in the top 10. Du Preez from Benoni Lake returned a 75, while Joubert from State Mines posted a 74 to tie for ninth on five-over.

Two-time champion Gerlou Roux battled to a 77 and the Western Province golfer will have some work to do at six over. Overnight leader, Shaun le Roux from Westlake Golf Club also had a battling day and tied for 17th after an expensive 78.