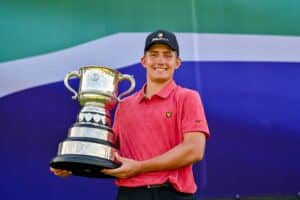 4 December 2022 – While former double SA Amateur Thriston Lawrence celebrated a wire-to-wire victory in the 112th Investec South African Open Championship, Christiaan Maas made his own bit of history when he joined an elite group of three as the leading amateur at Blair Atholl on Sunday.

The 19-year-old Pretoria golfer emulated Neville Sundelson (1974) and Masters champion Charl Schwartzel (2002) to become only the third amateur to win the Brabazon Trophy and the Freddie Tait Cup in the same calendar year.

After red-hot opening rounds of 65 and 67, Maas had pulled well clear of his four GolfRSA National Squad team-mates, but a rocky start on moving day threatened to derail his campaign. “I was four-over through the turn, but I managed to rally with a trio of birdies over the last five holes to get myself back to level-par,” said the Pretoria Country Club golfer.

Maas entered the final round as one of two favourites.

Yurav Premlall was looking to make it back-to-back wins after his success at last year’s event at the iconic Gary Player Country Club and Maas knew a solid closing round was required to stay clear of the GolfRSA No 1.

By his own admission, he made it a lot harder on himself and his mental resolve was pushed to limits by balky putter on the signature big, firm greens.

However, a closing round of 77 gave Maas a 72-hole total of five-under-par, good enough for a share of 35th, and good enough to edge Premlall by two shots for the leading amateur honour. “I am happy to be the Freddie Tait Cup winner, and I’m really proud to have won both such prestigious titles in the same year. To join Charl on such an exclusive list is a tremendous honour,” said Maas.

The Texas University freshman is always extraordinarily hard on himself, and despite hugging the silverware, today was no exception.

“I played great golf for two and a half rounds,” he lamented. “Today really wasn’t pretty; I thought for sure through 13 holes that I’d lost my chance to win, but then someone told me on the 16th that I was still two shots ahead on five-under. I managed to somehow par the last two holes.

“I could have played a lot better. I think I had five three-putts today, including the 18th. The golf was terrible, and I’m grateful that I still won the Freddie Tait Cup. I’m happy with where my game is headed, but I need to spend some serious time with the putter before the Alfred Dunhill Championship starts next week.”

Schwartzel, who finished in a share of ninth this week, was full of praise for the young prodigy whose feat here matched his own achieved over two decades ago.

“It’s fantastic for us to see all the young blood coming through,” Schwartzel said. “It’s been 20 years since I won both titles, so it was high time that someone stepped up. Congratulations to Christiaan on achieving this incredible feat.

“I’ve been following the rise of the GolfRSA National Squad guys the last two years, and Christiaan has been very impressive. And he just started college in the United States a few months ago and already made such a mark with the Texas Longhorns that he made the shortlist for the Fred Haskins Award.

“The SA Open is always a tough week, and it’s even tougher for an amateur to perform well under this kind of pressure. He showed his skills in the first two rounds, and the strength of his mental game kept him in front on the last two days when things didn’t go his way. He was a great a great future in the game.”

The fact that all five of GolfRSA’s top ranked golfers made the cut, marking the highest number of amateurs joining the weekend action in the world’s second oldest Open in more than 30 years, was nothing short of a victory for GolfRSA.

Maas, Premlall, 2022 SA Amateur champion Kyle de Beer, 2022 SA Stroke Play winner Jono Broomhead and Aldrich Potgieter, who won the 128th Amateur Championship in June – all members of the elite GolfRSA National Squad – received invitations on account of their respective achievements this season, which bears testament to the great work of development that’s being done by the institution.

Playing in the Investec South African Open is a dream for every South African kid who plays golf and Maas was just as pleased to be in the field once more after his two previous starts were short-lived.

“Competing here this week and playing with the pros was definitely the highlight of my season,” Maas said of his experience at Blair Atholl.

“They are so friendly, and they are happy to talk about anything you want to know. I played with Deon (Germishuys), who was on the national squad with me, and Dean Burmester in the final round, and it was fantastic, despite the bad golf I was playing. Dean is the nicest guy in the world.

“Competing in the Investec SA Open was a great experience for all of us, and I’m just so grateful to GolfRSA for making this week possible for us. I’d also like to thank Mr Rupert for all his support and for launching the national squad programme.”

Maas will be heading to one of his favourite golfing destinations next: Leopard Creek, the home of the Alfred Dunhill Championship with Premlall, Potgieter and De Beer.

“I’m very excited for next week. The tournament was cancelled due to Covid-19 last year, and I’m really glad it’s back on the schedule,” he said. “I know that course very well. Last year, my friend and I went there for two weeks, we played 36 holes every day. Hopefully, I can play four good rounds instead of two and a half.”

Premlall had to be satisfied with the bronze medal after a final round 75 left him two shots short, but the Glendower golfer will be hoping to repeat his runner-up finish in the African Amateur.

Potgieter also closed with a 75 to finish on level-par 288, De Beer was four shots back on 292 and Broomhead, making his debut in the Investec SA Open, finished on 296.