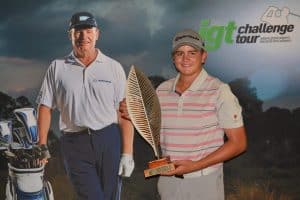 And now – at 15 years, seven months and 22 days – the youngest IGT Challenge Tour winner after a four-shot triumph in the Race to Q-School #4 at State Mines Country Club on Wednesday.

“It’s pretty cool to be youngest champion, but that’s the cherry on top,” said Jarvis, who sits at 11th in the South African Open Amateur Rankings.

“I’m really excited to start of African swing with some confidence and form and to taking my A-game to Leopard Creek for the African Amateur Stroke Play next week.”

Jarvis spent a couple of weeks on the bench just before the start of the season after he injured inter-costal muscles during practice. “I missed the first two Nomads National Order of Merit events, but I got to some competitive time on the Bridge Fund Managers Junior Series. I still wasn’t swinging it great in the Free State Open, but I got myself in contention in the Gauteng North Open and finished second at Silver Lakes.

“I felt fine swinging the club, but my short game was still rusty, so I decided to play the IGT Challenge Tour to put my wedges and putter under some pressure. I grew up playing this course, so I thought I would do well, but I never expected to win. That was a nice bonus.”

Heading into the final round, Blaauw led the field on 11-under and Jarvis was three off the pace, but he got off to a birdie start and closed the gap on the overnight leader with further birdies at three, four, seven and nine.

He was a shot adrift after 10, but Blaauw dropped out of contention with a trio of bogeys.

Meanwhile Swiss professional Neal Woernhard, Big Easy Road to Sunshine Tour winner Dylan Kok and former IGT Challenge Tour winner Tristen Strydom all made a charge on the back nine. The Swiss golfer fired five birdies for a 65 to set the clubhouse target at 11-under. Kok carded 68 to join Woenhard on 205 and Strydom got to 11-under.

Jarvis kept a cool head under the mounting pressure.

He shot to the top of the leaderboard with a birdie at the par four 12th and stretched his lead to four shots with a brace of birdies at 14 and 15.

“I ended up three-putting for bogey to match Neal with a 65. I’m really glad now that I decided to play after all, especially after I was named to the GolfRSA Junior Team to play the All-Africa Junior Golf Challenge in March. I know the other guys on the team really well (Jayden Schaper, Christo Lamprecht and Sam Simpson) and we are going to go all out to win. My game feels really solid right now and I feel I can only keep on improving.”

Blaauw, who is also heading to Leopard Creek for the start of the African Swing, closed with an even-par 72 to tie Kok and Woenhard for second. Strydom, however, dropped shots at 14 and 16 and had to settle for fifth on his own on nine-under after posting a 68.

Written and released by Lali Stander on behalf of GolfRSA and the IGT Challenge Tour.