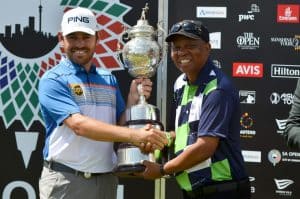 JOHANNESBURG (9 December 2018) – The emotion that flowed out of Louis Oosthuizen when he became only the fourth South African to win both The Open and South African Open hosted by the City of Joburg at Randpark Golf Club on Sunday showed a man playing as much for a few people who weren’t there to see his win as for the delighted South African fans who did.

With his six-stroke victory on 18 under par after a closing 67, Oosthuizen joined Bobby Locke, Gary Player and Ernie Els in one of the most elite clubs in South African professional golf.

“To be the fourth South African to win both – that feels really special,” he said.

Struggling to talk through his tears, Oosthuizen explained why his first victory since 2016 meant so much to him. 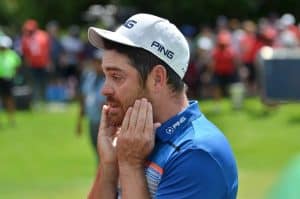 An emotional Louis Oosthuizen after he won the 2019 SA Open Championship, hosted by the City of Joburg at Randpark Golf Club; credit Ernest Blignault.

“It’s always tough when you’ve been through some stuff and the people who have been behind you are not here to celebrate with you. My wife and kids have been phenomenal. It would’ve been great to have them here with me,” he said.

And they would no doubt have seen a golfer as in control of his overall game as he’s ever been.

Oosthuizen took a three-stroke lead into the final round and kept his composure through two bogeys in his first three holes and a chasing Branden Grace who at one point narrowed his lead to just one. He then made five birdies and an eagle to give himself a commanding lead, and could afford a bogey on 17.

“My putting has been as good as it’s ever been,” he said. “I had all the confidence to hit my putts, even if I hit them two or three-feet past. You don’t have that all the weeks, but this week I definitely had that.”

The charge by Grace in particular served to intensify the focus of Oosthuizen, who admitted he was still hurting from being beaten by Lee Westwood for the Nedbank Golf Challenge hosted by Gary Player.

“I was outplayed by a brilliant last round by Lee and that hurt. I wasn’t happy with that result, but I made sure that this week I was focused and I didn’t get down on myself. It was a tough start but luckily everyone else had similar starts. I could easily have lost that three-shot lead after three holes. I saw Branden’s name up there and I thought he would really come at me. That got me focused,” he said.

The three spots available for the Open Championship at Royal Portrush Golf Club next year went to Langasque, Schwartzel and Wilson.

And the Freddie Tait Cup for the leading amateur finisher in a glorious week when four amateurs made the cut was eventually won by Jovan Rebula, who finished on six under par overall.

Written and released by Michael Vlismas on behalf of the SA Open.