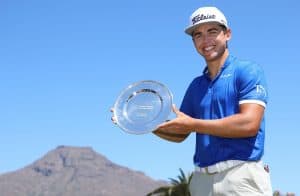 9 May 2021 – Garrick Higgo continued to write his own chapter in the European Tour history books as he powered to a second win in three weeks at the 2021 Canary Islands Championship.

At the beginning of 2019, Higgo was still a relatively unknown rookie in professional golf, but five months into 2021, he has shown he belongs on the big stage, just shy of his 22nd birthday.

Just 14 days after he lifted the trophy at the Gran Canaria Lopesan Open with a European Tour record low score of 255, a closing 64 with a hole-in-one moved him to 27 under and handed him a six shot victory at Golf Costa Adeje.
Australian Maverick Antcliff was the nearest challenger, one shot clear of Finn Tapio Pulkkanen.

All eyes were on the GolfRSA National Squad graduate as he took his score across the 12 rounds of the Canary Islands Swing to 68 under and sent records tumbling. Get this – taking his 18-hole returns in the two victories into consideration, he has gone 65-64-63-63-66-63-64-64 for his two wins!

A third European Tour win in just his 26th event makes him the fastest South African to three wins – not including Majors and World Golf Championships – and he also matches the record of Tiger Woods for the fewest number of events needed to claim three European/PGA TOUR wins since 1990.

With Burmester’s win being sandwiched by Higgo’s two, this is the first time that we have had three consecutive South African winners on the European Tour since 2012.

It is also the first time that feat has ever been achieved outside of South Africa.

To make the round even more memorable, Higgo also celebrated his first ace as a professional when he holed out at the par-3 seventh hole.

“It was a perfect number for a nine iron, I knew I had to hit a full one though, but I also knew I didn’t want to be behind that flag. When I hit it, it came off really hot, so I was hoping it was going to go long and then I saw one bounce and then it just disappeared. I didn’t know it had gone in, I thought it might have been long, but then someone behind the green started screaming, so we knew it was in.”

Higgo admitted he was happy to sink the final putt for the win.

“It feels amazing, I am happy to be done now. I am very tired but really happy and thankful. I did feel pressure from the start. It is not easy to lead, the other day was my first time, and in this game anything can happen.”

Higgo didn’t expect to be back in the winner’s circle so soon again.

“It’s unreal. I can’t believe it has happened so quickly again, but my game has been good so I can believe it as well. It feels good,” he said.

“I have been working really hard on a lot of little things and I have also accepted what works for me and kind of stuck with that. I think that has been a big thing. If I don’t play as well, I don’t look for something, so I am going to try and keep going.”

It has been a remarkable run for South African golf of late, with Brandon Stone, J C Ritchie and Wilco Nienaber also making it three wins in a row for the Rainbow Nation on the European Challenge Tour.

Higgo moves up to fifth on the Race to Dubai Rankings in Partnership with Rolex, and to the brink of entering the top 50 in the Official World Golf Ranking for the first time.

“I think we all want to win and all very hungry for a win,” said Higgo, who will join a growing band of South Africans in the year’s second major championship, the PGA Championship at Kiawah Island in South Carolina on May 20.

“I actually called Wilco’s win at the beginning of the week, so I am definitely going to brag about that with the other guys. I think we all just want to win and play our best. It is nice that it is working out perfectly.”

Louis de Jager signed for a four-under 67 to finish 17-under for the week in 12th, while Zander Lombard’s 68 saw him to 20th on 16-under. Justin Harding ground his way to one-under 70 and a share of 38th, with Justin Walters finishing on nine-under for a share of 51st.

In three weeks, Higgo squeezed a tie for eighth between his two wins in the Canary Islands, boosting his earnings for the season to about 550,000 euros – just over R9,5-million – and he will probably welcome the chance to sit down and catch his breath as he rockets to fifth on the European Tour’s Race to Dubai rankings, ahead of greats of the game like Rory McIlroy and Justin Rose.

Written by the European Tour and Michael Green; edits by Lali Stander for GolfRSA.