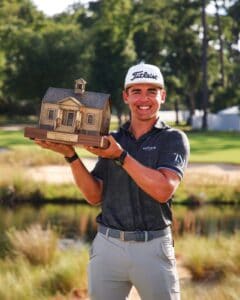 In his role as International captain in the Junior Presidents Cup of 2017, the former Masters winner had a youngster by the name of Garrick Higgo in his squad, a fellow South African, who stood out from his teammates away from the golf course more so than on it.

Higgo was 18 at the time, a young adult sure, but amongst the other teens he might as well have been 40.

“I was immediately impressed by him. Not just his game but his entire demeanor and personality was very mature and at ease. He just had a calmness about him that exceeded his age,” Immelman said.

Fast forward to 2021 and there may not be a hotter player in world golf leading into the PGA Championship than the now 22-year-old who had won twice on the European Tour in his last three starts before he lifted the Palmetto Championship trophy in only his second appearance on the PGA Tour this weekend.

At 39th in the world rankings, the GolfRSA National Squad graduate is on track to be the first Junior Presidents Cup player to make the actual Presidents Cup. Ironically Immelman will be the 2022 International captain at Quail Hollow.

“It would be awesome to play for Trevor. It’s obviously still a year away. But I mean, what a story that would be if I played for him in the Junior Presidents Cup and then the actual Cup,” Higgo beamed on the eve of playing his first major championship at Kiawah Island.

The rise of the youngster since his Junior Presidents Cup appearance has been swift. He spent a few semesters at UNLV before returning back to South Africa and surprising many by turning pro.

But he backed up the bravado with results, winning twice in 2019 and twice more in 2020 on the Sunshine Tour, the last of which was co-sanctioned with the European Tour, giving him a ticket to join.

His rise continued in 2021 where he’s finished T4-1-T8-1 in his last four starts heading into the PGA Championship. 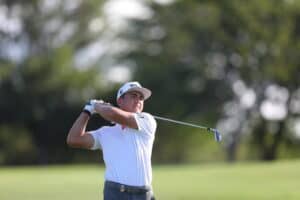 His personality is infectious – much like young Norwegian star Viktor Hovland. They both appear to always be smiling and always happy to be where they are. Given Higgo is left-handed Immelman says he is reminded of someone else as well.

“His demeanor reminds me of Phil Mickelson. He has a friendly face which always has a smile,” Immelman says. “He’s comfortable in his own skin, he’s relaxed. I’m excited about him. He’s young and has a lot to learn but he’s the type of guy we could be watching a lot of the next few decades.”

The smile isn’t by accident.

“It’s definitely the way I am. I am very chilled,” Higgo adds. “I think I do kind of show a little bit more chill than I actually am inside but it is something that you definitely need and that I’ve learnt to do under pressure.”

Higgo could have easily been a kid who rarely smiled given his past. But he has had another South African former Presidents Cup captain and major winner in his life over the years to help.

Legend Gary Player, who captained the 2003, 2005 and 2007 International teams, reached out to him when he was just nine after Higgo, his parents, an older brother and younger sister had been in a car accident that tragically claimed his father’s life.

“I was fortunate enough to play nine holes with him when I was nine. My dad passed away and I think his mom passed away when he was a similar age, so we kind of have that connection,” Higgo said.

“He always sent me letters when I was young, as well, just encouraging me to keep going all the way through my amateur career. When I played the U.S. Am at Oakland Hills, he phoned me the night before to run through the course and gave me some good tips and even through my pro period, helped me start on the Sunshine Tour. Through all my wins, he’s been there, and he’s been a tremendous mentor to have.”

As he prepared for his major debut, International team veterans Charl Schwartzel and Louis Oosthuizen also took him under their wing. Higgo soaked in their advice and feels confident he can make a good showing at Kiawah.

“My game is in good shape. I think I’m just going to learn a lot. Hopefully I’ll have a good week. If not, I’ll just learn,” he said. “I love playing in the wind. I grew up in Stellenbosch, Cape Town, where the wind blows every day, so I’m used to that. It doesn’t matter where you play. You still have to beat everyone that plays there and shoot the score. I think if my game is as good as it’s been, I could do pretty well, but there’s no expectations.”

Immelman will be a keen observer.

“It’s a distinct possibility that he could play his way on to our team next year. He has the pedigree, he’s top 50 in the world at 22, and he’s been winning at every level he’s played so he’s accumulated a lot of experience in a short period of time,” Immelman says.

“He has a lot of momentum coming in here but this will be a little different. This is his first PGA, his first major, and now a lot of people are paying attention to him on an extremely difficult golf course. So it will be a cool week to observe and see how he goes about it.

“It is a nice time to be the International Team captain. We blooded a lot of youth in Australia in 2019 and the rookies became one of our strengths. And now, in terms of more young guys, the likes of Higgo and Wilco Nienaber from South Africa, Cameron Davis and Min Woo Lee from Australia and Takumi Kanaya of Japan are starting to emerge. It’s exciting.”