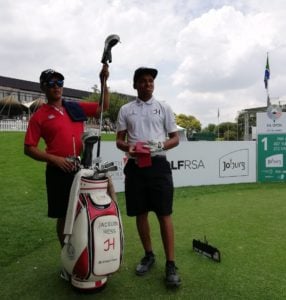 Hailing from a small town in the Western Cape, Robertson-born Jacquin Hess has one thing on his mind at Randpark Golf Club this week – and that’s lifting the second oldest trophy in golf.

The South African Open Championship, hosted by the City of Joburg, begins on Thursday and the South African Golf Development Board (SAGDB) graduate is hoping to make the most of his special invite to play in the tournament.

“I really want to win this one, it would be very special. I want to win the Sunshine Tour Order of Merit, even if it doesn’t happen this year – that’s one of my big goals,” the 29-year-old Hess told African News Agency on Tuesday.

“My goal is to win this week. I just need to get off to a good start. Coming down the stretch, hopefully I’ll be two shots ahead coming down 18 on Sunday. Thank you to the Sunshine Tour for the invite.”

Hess campaigns on the local Sunshine Tour, and the chance to tee it up in the event co-sanctioned with the European Tour is a massive opportunity. Despite being one of the less-fancied SA players in the field, a win – or even a top performance – could cement his future in the game..

“I’m fortunate to be one of the South African ambassadors and I’m proud to be South African. I loved the Springboks winning the World Cup and we as golfers want to do our bit,” said the former Big Easy Tour Championship winner.

“It’s going to have the same effect that the Springboks had if someone like me won – and that’s to inspire young kids to believe. We want youngsters from all areas to play this game. I’ve made some amazing friends, been to some amazing places. But it would mean the world to me if I could take the trophy back to Robertson. But not just for me, but for everyone back in Robertson and the kids in the SAGDB so they can grow that belief.”

With defending champion Louis Oosthuizen, former winner Brandon Stone and a number of top-ranked SA players including European Tour winners Erik van Rooyen, Justin Harding and Christiaan Bezuidenhout competing this week, Hess will have his work cut out to feature prominently on the leaderboard.

But he has been working hard on his game and knows the Firethorn and Bushwillow courses well.

With a best score of 65 at Firethorn and 67 at Bushwillow, Hess certainly knows his way around the parkland layout and a missed cut in the 2018 SA Open at Glendower Golf Club would not factor in his thinking this week.

“The game is there, I did some work over the festive season.  I’ve played many rounds here, so I should do well this week.

“I’ve played just the one SA Open at Glendower. There’s a lot of history in this tournament. Hopefully this year I won’t show too many emotions, hit it in play and make some good putts.”