Harvey in the hunt for Glacier SA Amateur glory 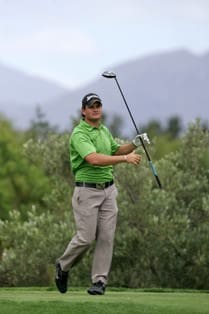 EAST LONDON, 2 March 2010 – A stiff North-Easter is adding some spice to the Glacier SA Amateur and the Kwazulu-Natal players took advantage of the wind to dominate the third round draw for this afternoon at East London Golf Club.

In-form Harvey took advantage of the stiff breeze sweeping across the fairways of East London Golf Club to dispatch Jason Alexandre of Central Gauteng 3 & 2. He now faces Versfeld for a spot in Thursday’s quarterfinals, a match that he thinks could go all the way to the 18th.

“I know him quite well,” said Harvey. “Obviously I’ve seen in the results that he lost in the play-off for the Proudfoot Trophy, so I know I’ve got a tough game on me.”

The 21-year-old from Mont Edgecombe says he is back to form after switching to a belly putter at the start of the season. “I’m in good form this season. I know I can give him a good run for his money. At the end of the day, with this format, all you can do is go out there and try your best and I feel that I can do that.”

Englishman Laurie Canter continued his march since winning the stroke play qualifier on Monday and ousting Justin Levy in the first round by defeating one of the tournament favourites, Brynn Flanagan, 6 & 4.

The English A-Squad member has dropped just three shots in the four rounds, but after his flawless performance, he cautioned, saying he found the game was a lot tougher than the score line suggests. “I think the result flattered me a little bit,” said Laurie. “Bryn is a really tough competitor; he really knows how to fight. Even though it looks like an easy win on paper, he sunk three long putts from over 20 foot – two of those to half – and he just never gave up.

“It definitely wasn’t an easy ride, but it was probably the best I’ve hit the ball all week. I missed one green and had an eagle and four birdies, so I was always going to be tough to beat.”

“Gert finished birdie 17, birdie 18. We both parred the 20th and I birdied the 21st hole to finish it off,” explained the delighted, but relieved reigning SA Strokeplay champion. “It was a long day out there, but it was good. I’m playing CJ (du Plessis) this afternoon and the wind is really starting to blow, so it should make for an interesting game – two inland guys with the wind blowing…. should be good value to watch.”

Rae Mackie battled a tough Michael Hollick for a 5 & 4 win to get to the top 16. “It’s always tough against Michael,” said Mackie, who caused the biggest first round upset when he dispatched tournament JG Claassen at the 18th.

“I started pretty poorly and he went up early in the round but I started making a couple of putts and the momentum swung may way. I was lucky that I got up on him before the wind picked up, otherwise I could have been in trouble.”

Mackie faces Laporta, who eliminated East London’s Johan du Plessis at the 19th hole. “Johan would have had the home course advantage in this wind, so it’s a bit of a relief to play Francesco, since we are both from up country,” said Mackie.

Having knocked off fellow KZN player James 3 & 1 in the second round, Pearson hopes his game hits better form against another fellow provincial player in Van der Merwe, who beat the Western Province’s Justin Turner.

“Elton and I had a really scrappy round,” said Pearson. “The golf wasn’t too great and I’m going to have to pick it up against Chris. I’ve played with him before and he is a gritty competitor; it will be a tough match, all the way.”