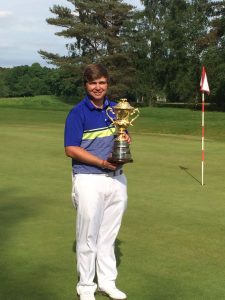 South Africa’s top ranked amateur spent the best part of his 20th birthday on the Hotchkin Course at the Woodhall Spa Golf Club in England on Sunday, but it was worth the effort when he was presented with the best gift he could hope for – the coveted Brabazon Trophy.

McClatchie came under intense pressure in the final round from Scotland’s Jamie Stewart and English duo Jack Singh Brar and Jake Burnage, but birdie putt at the final hole for a two-under-par 71 helped McClatchie to close out a one shot victory over the British trio.

“As birthday presents go, just a Major title could top this,” said the delighted GolfRSA National Squad player after his 10-under-par 282 triumph.

McClatchie’s name will be added to those of Neville Sundelson (1974), Richard Kaplan (1986), Craig Rivett (1989) and Charl Schwartzel (2002) and he was thrilled to continue South Africa’s proud history in the prestigious English men’s open amateur stroke play championship.

“I’m over the moon to hold this trophy,” McClatchie said. “It has been a dream four days for me here in England.

“I have just been in the zone and apart from a couple of bad swings, I played great all week. I think a huge turning point for me was holding on to a share of the third round lead in the brutal conditions. I wasn’t too worried, even after I had dropped a couple early on.

“I just focussed on my own game and tried to make good shots to stay in the running. Jamie deserves some credit for this, because he played really well, especially down the back nine and really kept me on my toes.”

Just a tad over three weeks ago, the Serengeti golfer showed up a field of professionals when he romped to a seven stroke victory on the Big Easy Tour at Killarney Country Club. He fine run continued with a top 10 finish in the Irish Amateur Championship and joint fifth in the Internationaux de France at Chantilly Golf Club last week and he put himself in a prime position to challenge for the title when he took the 36-hole lead with rounds of 70 and 66.

A 75 in round three saw him head into the final round in a three-way tie for the lead with the English pair of Brar and Burnage on eight under. The trio had four shots on the field.

McClatchie got off to a birdie start, but surrendered shots at three and four.

“I flew the green at the third and had to up-and-down for bogey and I three-putted the fourth,” said the Wanna Be A Champion Academy player. “I hit a good tee shot and a solid approach to the middle of the green at six and two-putted for birdie and I was tied for the lead with Jack when we turned.”

McClatchie edged ahead when he holed a 10-footer across the slope for birdie at the tough par three 12th and the South African converted for another birdie at 14.

“Jamie piled on the pressure with birdies at nine, 11, 14 and 15 and Jake and Jack weren’t far behind,” he said. “At 16, I blocked myself off the tee in the trees on the right. My only option was to chip out and I up-and-downed for bogey.

“I missed a 20-footer for birdie at 17 and Jamie made his birdie to close the gap. With Jack and Jake playing behind, I knew I needed a birdie finish.”

“Knowing they were down there gave me an extra little kick,” McClatchie said. “I hit a great drive down the middle, but my approach came up short in the greenside bunker. I knew it was do or die and I nailed the bunker shot, leaving myself a five foot birdie putt. I made it and Jamie also birdied to finish one behind.

“We watched as Jack and Jake both got on the green for two, but they both missed their eagle chances to force a play-off. It took a few seconds to sink in that I was the 2017 champion, but I won’t lie, it felt fantastic. It was so great to have my mom and my mates there to celebrate with me. This is without a doubt my biggest achievement and I hope to purple patch continues for a while.”

Venter tied for 17th and Saulez grabbed a share of 35th, while De Lange tied for 42nd.

McClatchie, Venter, Saulez and Higgo travel to Scotland next where they will compete in the Carrick Neill Scottish Men’s Open Championship with fellow GolfRSA National Squad players Marco Steyn and Franklin Manchest. The squad, plus Dylan Naidoo and Jovan Rebula, will compete in the St Andrews Links Trophy, before they travel back to England to qualify for the Amateur Championship on 19 and 20 June.

You never know, but 23 June might just turn out to be the happiest day of the year after all for McClatchie and company at Royal St Georges.