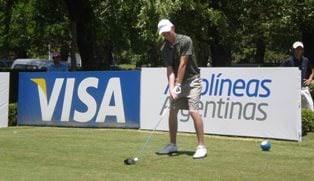 Daniel Hammond’s one over par 72, in the second round of the Juan Carlos Tailhade Cup, an improvement of seven shots on his first round score, helped the South African two man team, where both scores count, to an improved five over par 147.

As a result the team moved up two places on the International Team Tournament leader board to twelfth place with a 36 hole aggregate of 301 which is seventeen over par. They are now sixteen shots off the pace.

Leading the 72 hole stroke play tournament, which is being played at the Los Lagartos Country Club, just outside Buenos Aires, Argentina, is Norway. Their two players recorded a second round of 142, made up of a 70 from Espen Kofstad and 72 from Elias Bertheussen. They have a 36 hole aggregate of 285, one over par.

Best team score of the day went to Australia who moved up five places on the team leader board. Ryan McCarthy (68) and Nathan Holman (72) recorded a second round of 140, ten shots better than the preceding day.

They along with a disappointing performance from England (152), the leaders after the first round, are on six over par 290, at the halfway mark.

Ryan Dreyer, the thirty eight year old Killarney Country Club member from Central Gauteng, cut a frustrated figure after his round. Like yesterday he felt he was not playing badly; “Just I am not scoring,” he said.

Dreyer went out playing his first nine holes in regulation. He came home in four over par 35, made up of four bogeys and the rest regulation golf.

With a thirty six hole aggregate of 150, Dreyer finds himself tied in thirty ninth place.

Hammond, from Wanderers Golf Club in Johannesburg, was more himself in the second round compared to the first. He recorded two bogeys and a birdie on the front nine, with both he and Dreyer having started on the first tee, and two birdies and bogeys on the back nine for loops of 37 and 35.

The tall South African moved up thirty six places in the individual competition leader board, to tied forty sixth place, with a 36 hole aggregate of 151, nine over par.

Leading the individual competition is Martin Kim of the host nation. He had a course record equalling 64, seven under par, along with his first round of 71, he now leads by three from Scott Salmon on Spain.

All international team players and those making the cut play in Saturday’s third round. The South Africans are paired in the draw with Mexico and Canada starting from 11h50.

(Emanuele Sesia was disqualified in the second round which mean Italy is now out the team competition.)