Hammond and Dreyer qualify in Argentina 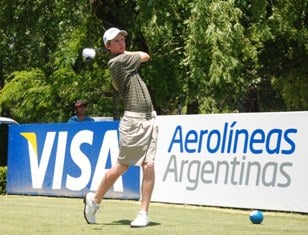 Both Danilel Hammond and Ryan Dreyer successfully negotiated their way through the 36 hole Qualifying to enter the match play stages of the 115th Argentine Amateur Championship.

Playing the Highlands Park Country Club layout, forty five minutes from the centre of Buenos Aires, in tricky windy conditions, made for higher scoring in Wednesday’s second round.

Daniel Hammond played very consistently. He went out in 37, playing all holes in regulation except for hole six which he bogeyed. He then birdied ten to go level. He remained there until the last hole which he bogeyed. His last nine he played in level par finishing with a one over par 73.

Ryan Dreyer, on the other hand, battled with his putting: “Nothing dropped for me today,” the frustrated Killarney Country Club golfer said after his round.

Dreyer, starting on the tenth tee, birdied the first hole, bogeyed the next two, played the thirteenth in regulation and birdied the next. That pretty much sums up how the round went for the former South African Amateur Champion.

He went out in 38, two over par, made up of two birdies and four bogeys, and came back in 38 which included two bogeys, for a frustrating four over par 76.

Winning the Kenneth R.Gordon Cup, as the leading player in the qualifying, was Colombian Daniel Ocampo. He had a final round of 66, six under par, the best of the day, to finish on an eight under par aggregate of 136. This was not only two shots clear of the field but also equalled the lowest thirty six hole qualifying aggregate set last year by German Benedict Staben.

Sixty four players now proceed through to the match play stages. Thirty two matches are played on Thursday, each match over eighteen holes. The second and third rounds will be played on Friday followed by the quarter and semi finals the next day. The final will be played, over thirty six holes, on Sunday.

The winner of the Argentine Amateur Championship qualifies to compete in the 2011 British Amateur.