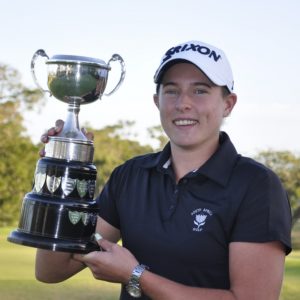 24 April 2018 – It was unquestionably the toughest test of her golf career, but when the chips were down, 18-year-old Casandra Hall held her nerve to box a clutch par putt in extra time that earned her the 2018 Sanlam South Africa Stroke Play Championship title on Tuesday.

The Ebotse golfer opened with a three-under-par 69 and shot 72 in round two at Port Elizabeth Golf Club and, having opened up a four shot lead over playing partners Woo-Ju Son from Gauteng and Swiss amateur Azelia Meichtry, she was primed for a wire-to-wire victory.

However, with a three-club wind sweeping through the tree-lined course, Hall’s lead evaporated quickly as she dropped four shots from the second hole.

She salvaged a birdie at the fifth, but gave the shot back with another bogey at the par five eighth and turned one-over and under major pressure.

Her biggest threat was not Son or Meichtry, but defending champion Kajal Mistry.

South Africa’s top ranked junior won both the Boland Ladies Open in Hermanus and the Ackerman Championship at Langebaan Golf Club in similar windy conditions last year. Coming into the women’s amateur golf’s premier event on the back of a runaway eight stroke victory in the Nomads SA Girls Rose Bowl Championship at Royal Cape, her skills in the wind were paying off.

Mistry made a great start when she offset bogeys at two, six and eight with birdies at three and nine and grabbed a share of the lead through nine holes.

The Randpark golfer took the outright lead with a birdie at 11 after Hall dropped again at the par four 10th. She bogeyed 12 and 15, but three solid pars over the closing holes netted Mistry a final round 74 and she set the clubhouse target at four-over-par 220.

Hall, meanwhile, clawed her way back into contention with a birdie at 13, but slipped to four-over with back-to-back bogeys at 14 and 15. She also made pars at final three holes for a 79 to tie Mistry for the lead at the end of regulation play.

The pair set off for a short course play-off at the 10th and 11th holes.

Hall hit her second in the greenside bunker at 10, while Mistry finished long and left of the green. Hall splashed out to four feet and made the putt, but Mistry chipped to give and tapped in for par.

They moved to 11, where Mistry pulled her tee shot left.

“I also veered left off the tee, but Kajal had a clean shot to the green,” said Hall. “I was further back and had to punch out from under trees. I was in the same spot in the regulation play and it landed just left of the green. Kajal hit hers long and back right, just off the green.”

Hall fluffed her chip but got onto the green. Mistry’s birdie putt ran 12 foot past the hole, but it was still inside Hall’s putt. And she hit it to perfection.

“The putt was on the same line as in the morning and I knew it was good when I hit it,” said Hall. “Kajal knew she had to five hers a chance, but she knocked it three foot past. I can’t describe the joy I felt after finally winning. I had too many close calls to count in the last two years, and to finally get through the door in this championship is so inspiring.”

Happy with the result, Hall was frank about her shaky start.

“The wind really got to me,” she said. “I just couldn’t get comfortable and I hit too many high shots, and the bogeys kept mounting. And if I made a birdie, I’d dropped a shot right away. I had bad bounces and lip-outs and it all just added up.

“After the first nine holes, I took a good look at my scorecard and told myself to pull it together. The last nine holes was a grind; I was just trying to limit the damage and keep Kajal from running away with the championship.”

Hall said her first round 69 was the highlight of the week.

“I know most people would say the win, but really, breaking par on the first day was huge for me. It gave me so much confidence to know I could beat the best golfers in the field and that kind of carried me through the tournament.

“I am incredibly proud to be the Sanlam SA Amateur Stroke Play champion. This is the second most esteemed event in amateur golf. I’m dedicating this to my mom, Charmaine, who has waited nine years for this moment.  It’s a dream come true after so many runner-up finishes and now I have the belief that I can pull off the double and win the Sanlam SA Amateur, as well.”

In the B-Division, 12-year-old Kamaya Moodliar from KwaZulu-Natal also wrapped up wire-to-wire result. The Umhlali teenager carded rounds of 82, 86 and 83 to win by 14 strokes from Gauteng’s Lauren Clough and Sanet Pieterse from Border a winning total of 251.

Lara Giddy from Eastern Province finished a further shot back in fourth on 266.