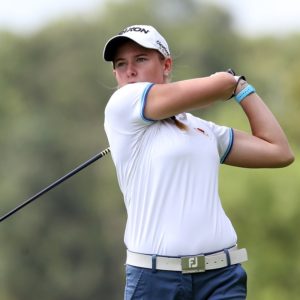 Casandra Hall from Ekurhuleni is chasing a wire-to-wire victory in the Sanlam South African Amateur Stroke Play Championship at Port Elizabeth Golf Club after holding on to the lead in Tuesday’s second round; credit Sunshine Ladies Tour / GolfRSA

The 18-year-old Hall from Ekurhuleni looked capable of leaving the rest of the field to scrap for second place after a brilliant front nine of three under par. Four bogeys on the back nine gave the chasing pack the incentive to close the gap.

However, no-one came close to the Ebotse golfer’s 36-hole target of three-under-par 141.

Gauteng junior Woo-Ju Son and Swiss golfer Azelia Meichtry posted a pair of 72s and Caitlyn Macnab from Ekurhuleni shot 73 to finish four off the pace.

Defending champion and South African number one Kajal Mistry racked up four birdies on her way to the low round of the day, a two-under-par 70 that earned the Gauteng golfer a share of fifth on 146 with Brittney-Fay Berger from KwaZulu-Natal, Ekurhuleni junior Kiera Floyd and Gauteng North’s Lindi Coetzee, the only other player to break par with a 71.

Hall got going with a birdie on the par five 13th hole and followed with another gain at the short 14th to increase her two-shot overnight lead.

“After a good four at the 13th, I hit it to the top left corner at 14,” said Hall. “I had a 20 metre putt downhill all the way, and the line held all the way. I drove it nicely down the middle at the 16th, and had a short wedge in. I struck it perfectly and stuck it to six foot and made the putt.

“The wind picked up a little, but it was nowhere near as bad as I’ve played at Port Elizabeth Golf Club before. After the double at 17 in round one, I was very pleased to finish with two pars on the front nine, but I battled a little down the back nine.”

Hall dropped shots at one, three and four, managed a birdie at five but gave another shot back at the par four seventh.

“It was a mixture of putts not dropping and losing focus a bit,” she said. “It’s tough when no-one is chasing. I was a little frustrated when the putts stopped dropping, but I kept grinding and it was nice to get one shot back at five.

“I’m heading into the final round with a four shot lead, playing for the biggest title of my career, so I’ll have to keep my head in the game. But it’s very exciting. I’m playing with Azelia, who is a very experienced golfer, and Woo-Ju, who is deadly if she gets her putter going.”

Kamaya Moodliar from KwaZulu-Natal also protected her overnight lead to keep control of the B-Division Competition.

The Umhlali junior followed an opening 82 with a 14-over 86 in round two and will take a four-shot lead into the final round over Laura Giddy from Eastern Province, who returned an 87.

Kayla Paulsen from Western Province is third on 32 over, with Zahn Scholtz and Sanet Pieterse from Border in a four-way tie at 35-over with Tebogo Lefifi from Gauteng, Ekurhuleni’s Rene Matthee.