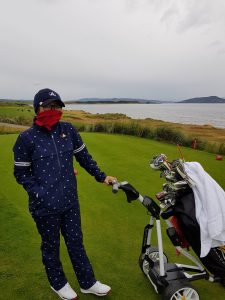 INVERNESS, Scotland (20 September 2018) – The 54-strong field in the 2018 Duke of York Young Champions Trophy was severely tested by brutal weather conditions at Castle Stuart Golf Links in Scotland on Wednesday.

South Africa’s top ranked junior Woo-Ju Son did remarkably well to stay in touch with leader Barclay Brown from England in the second round at Castle Stuart Golf Links in Scotland. The petite Gauteng golfer slipped to joint 16th on 13-over after signing for a grinding 10-over-par 82.

She is nine shots behind Brown, who leads by one shot from Scotland’s Conner Wilson, Heejong Kim from Korea and first round leader Joseph Byrne from Ireland.

“Well I can honestly say I have never been on a golf course in the weather we endured today,” said Womens Golf South Africa president Sally Greasley.

“Due to the forecast, the organisers shortened the course slightly for both boys and girls and it was a good thing, because Storm Ali threw it all at us.

“Woo-Ju didn’t make a fantastic start. She pulled her first drive into the rough on the left and had a difficult shot to the green. Her approach hit the green, but bounced off down the side. She chipped and two-putted for bogey.

“She steadied herself, but her drive veered left again and the par three fourth and ran down a deep slope. She left her first putt short, and took two more putts to find the hole. By the time we reached the stroke one, par four seventh, it was pouring and the wind blew a gale.

“She left her second short after a good drive and her ball settled in a nasty tuft of grass.  With the ball well above her feet, she pulled it and missed a long putt for par. She managed a good par at eight, but hit her approach at nine right.

“She hit a good chip up to the green over a grassy verge, but then the players were told to mark their balls. Water had started to puddle on the greens and play was suspended for an hour.”

Son holed a long putt for par and turned six over for the tournament.

The wind returned with force as the Country Club Johannesburg golfer started her back nine and she dropped another shot at 10. After a good par at 11, she narrowly missed an eagle putt as 12, but tidied up for her first and only birdie of the day.

“The 13th played straight into the wind,” said Greasley.

“During the first round, Woo-Ju hit driver and a gripped down wedge in, but on Tuesday, she was still 20 metres short after hitting driver, 3-wood. She left her chip short and missed the par putt. She gave more shots back to the field at 14, 15, and 16.

“By this stage, the force of the wind was such that Woo-Ju and her playing partners could literally not hold themselves still enough to putt. Trolleys were being blown over, the flags were nearly horizontal to the greens and balls were rotating and in some cases moving off the green.

“The par three 17th was also into the green and despite a great drive, her ball finished 20 metres short of the green. She chipped up and made the putt for a nice par. On to the difficult 18th, where her drive was taken by the wind way left into the rough.

“She almost shanked the ball straight across the fairway into more rough, then managed a good chip to the front of the green. She missed the putt and ended up with a 10-over-par 82. “The early starters had much better weather and therefore managed to score better, but at 13-over for the tournament, Woo-Ju was still in the top 15.

“I am incredibly impressed with the way Woo-Ju kept her composure throughout what was quite frankly the worst conditions I have ever experienced on a golf course.  A rules official from the R&A remarked that if this was The Open, play would continue, but that was of little comfort for the players who walked off the course soaked to the skin and very cold.

“Woo-Ju kept her head down to the last putt, took her time, composed herself, walked away when she needed to steady herself, and never gave up. No rain is forecast for tomorrow and hopefully the wind dials it down a notch of two.”