Greta Badenhorst, Past President of Western Province and who served on the SA National Executive from 1995 to 1996 passed away suddenly today at the age of 77. 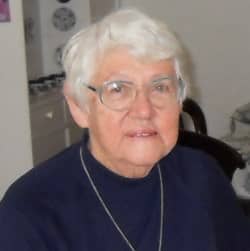 But Greta was probably best known for publishing the scores of all the Western Province and Boland ladies competitions in the newspapers every week and for doing a weekly report on Women’s Golf in the Weekend Argus. She was the voice of women’s golf in the Western Cape.

Inbetween her golfing duties, which including assisting at all the national and provincial events subsequent to her term of office as President, she worked for the many charities which were supported by her church. And her shortbread was ledgendry!

She recently moved into a Granny Flat with her son Alan in Hout Bay but was delighted that the family would be returning to Pinelands, her home for most of her life in April. The joy in her life was a baby grand-daughter – just a few months old – a change after only having sons and grandsons.

We salute this lady who gave so much to everyone she met. We will miss her.