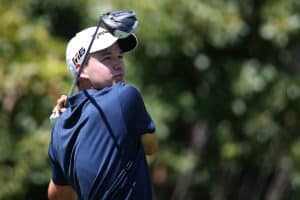 A tie for 39th hardly set the golfing world alight, but it is a first step towards Filippi’s goal of emulating fellow National Squad member Garrick Higgo, who won the 2019/20 Sunshine Tour Rookie of the Year title.

Higgo, who impressed with two tournament wins in a rookie season where he finished sixth on the Order of Merit with nearly R1.3 million in earnings, finished rookie race ahead of three fellow former Squad members – Wilco Nienaber, Dylan Naidoo and Deon Germishuys.

In fact, these days it’s hard to find a front page of any Sunshine Tour leaderboard that doesn’t feature a recent graduate of the National Squad, such is the success of the programme since its inception five years ago, following a generous donation from businessman Johann Rupert.

“It’s rewarding to see the young players coming through our Squad and then performing so well,” says GolfRSA CEO Grant Hepburn.

“The aim of the squad is to provide the best preparation for the players so that they can reach their peak in terms of their potential. If they are good enough and the time is right, we aim to have prepared them so that they can cope with the challenges of the professional ranks.

“The gap between amateur and professional can be quite a big one, both physically and mentally, so we look to provide the necessary support and playing opportunities for our talented amateurs. In some ways we are a finishing school – adding a layer of polish to the hard work done by the clubs, unions and coaches.” 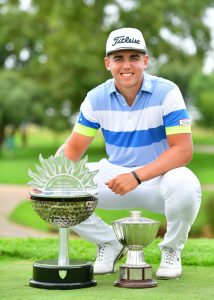 Higgo’s breakout season also saw him come within a whisker of attaining his full European Tour playing privileges. Both he and Nienaber progressed through all three gruelling stages of European Tour Qualifying School to achieve Challenge Tour playing rights – and in all likelihood a number of starts on the main tour.

“It was always one of my goals to win Rookie of the Year,” Higgo commented from the United Kingdom, where he has based himself while he waits for the Challenge Tour season to resume this week.

“To think that I started last year with no status and now I have two Sunshine Tour wins and a Challenge Tour card – I’m delighted with how my rookie season went,” he said.

“It definitely gave me the confidence that my game was good enough to compete with the best players,” the Boland golfer said. “The gap between amateur and professional golf may be big, but the feelings when you’re try to win a tournament are still the same. You still feel the nerves and the pressure and the rush when you know you’ve done it.”

Nienaber, who has also based himself in the United Kingdom, has made the most of his opportunities on the European Tour. 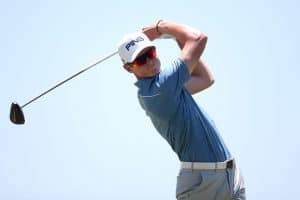 Having patiently waited for a start from the reserves list, the 20-year-old from Bloemfontein has performed well, including a fourth-place finish in the recent English Championship and tie-sixth in the Andalucia Masters, and has taken his season earnings past R2.4 million.

Unfortunately, due the season being cut short by the Covid-19 pandemic, the European Tour has ruled that all players will retain the status they had at the start of the season, meaning that unless the European Tour makes special provision, Nienaber will be back on the Challenge Tour next year.

“It’s disappointing because I’ve been playing well and ordinarily I’d be fighting to get my full European Tour card,” he lamented. “But it’s still very good experience for me and I’m still playing to see how high I can finish on the Order of Merit and to gain world ranking points.” 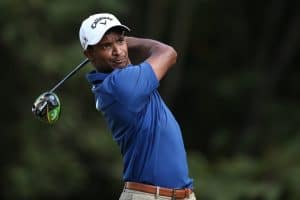 In a similar career path to the one taken by Higgo, Gauteng’s Naidoo spent a year at college in the US before heading home to earn his Sunshine Tour card. The former SA Amateur runner-up came through the Vusi Ngubeni Qualifying School and made himself comfortable on the Sunshine Tour with earnings of R439 000 in a consistent, if unspectacular, rookie season.

“I really wasn’t sure what to expect of my first season on Tour,” he explained. “Part of me just wanted to secure my card for the next season, but the other part wanted to win the Order of Merit.”

Boosted by solid results in the co-sanctioned events, Naidoo ended 37th on the final Order of Merit standings and is looking to improve this year.

“I’m into the co-sanctioned events and everyone on Tour will keep their status this year, so I’m really looking forward to playing with more freedom and being more aggressive,” he said.

“I have job security for the next two years so it’s a fun, freewheeling half season. My goal is to win this year. I mean, that’s why we all play golf – for that adrenalin rush of being in contention. There’s no better feeling.” 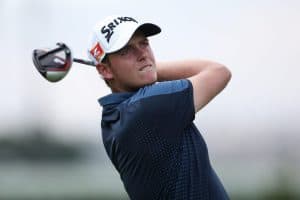 Former SA Amateur champion Germishuys finished fourth on the Rookie of the Year ranking, making up for a slow start with three top-10 finishes.

“Last year I was quite nervous about keeping my card, so I started off quite conservatively,” the Strand golfer explained. “So when I realised I had made enough money I started to play with a lot more freedom.

“But you can’t worry about stuff like that. You wait your whole life for this opportunity and you need to take it. I had my chances last year, so this year I’m really hoping to get it done.”

As former squad players start to make their presence felt in Sunshine Tour events, one knock-on effect is that rookies entering the system feel a little more comfortable due to so many familiar faces.

This year, Filippi is joined by former squad members Jayden Schaper, Cameron Moralee, Clayton Mansfield and Albert Venter the race for Rookie of the Year honours.

“It’s kinda cool to see so many old friends out here on Tour,” explains Filippi. “I mean, just look at what Garrick has achieved last year, it’s definitely inspiring. Clearly GolfRSA is doing a good job with the amateurs and juniors in the system.”