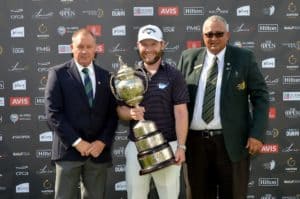 12 January 2019 – South Africa’s Branden Grace carded an incredible final round nine-under 62 to win the South African Open hosted by the City of Joburg at Randpark Golf Club on Sunday.

Not only was it an amazing way to win his national Open, it was the lowest closing round to win an SA Open in the tournament’s history. And his 62 matched the score that Grace shot in the British Open in 2017 at Royal Birkdale – the lowest score ever recorded in a Major.

Grace’s 21-under total was three better than tournament host and defending champion Louis Oosthuizen, who finished second on 18-under with a three-under 68 that featured a hole-in-one at the par three eighth.

Nine one-putts. One bogey. An eagle and eight birdies. The victory at Firethorn was his ninth on the European Tour and came with a first prize worth R2.7-million. It was the title he has been chasing since 2007. 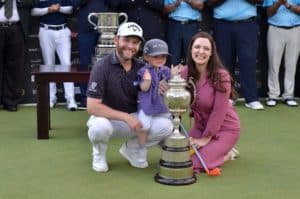 “It took me long enough to get my hands on this trophy,” said the 31-year-old Grace.

“This is the one I wanted. I’ve won the Dunhill, the Nedbank, the Joburg Open and Dimension Data, but this is the one I really wanted to get my hands on. Well, now it’s in the bag and it feels great.

Being the second oldest event in the world means a lot and it also means so much to win it in South Africa in front of the home fans.”

England’s Marcus Armitage was third on 16-under, with another Englishman in Jack Senior on 15-under alongside SA’s Jaco Ahlers.

GolfRSA’s number one ranked amateur Jayden Schaper was among a host of players tied on 13-under for sixth position. The 18-year-old collected the Freddie Tait Cup for his efforts – the same trophy Grace won in 2006 at Humewood and certainly an indication that the future is bright for the Ebotse golfer.

Despite a bogey on his second hole to fall four behind overnight leader Oosthuizen, Grace said he kept believing the tournament was destined for his clutches.

“I felt in control from the start. I actually hit a good shot into the second, maybe just a couple yards right and had a big kick to the right. I took it on the chin, and my goal was to be tied with the leaders after nine holes. And I probably would have been one ahead if Louis didn’t have the hole-in-one on eight,” he said.

“It was a great day. I can’t remember the last time I played this well and was so in the zone – even from the first hole – I had a good look at birdie at the first. It was such an amazing day, and what a way to finish off.”

It was indeed a tense final round, with Oosthuizen struggling with a cold putter and Grace, playing in the group ahead. applying the pressure.

“If somebody tells you they don’t look at the leaderboard, I think they’re lying,” Grace said.

“There are so many leaderboards out there, you can’t not look. On a day like today, you have to look at the leaderboards when you’re coming from behind.

“When I saw I was tied or one ahead, I kept on pushing. In the past I might have put the brakes on, but today was a different scenario. I stayed in the moment.” 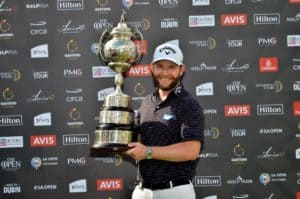 It was his first finish in the winner’s circle since November 2017 when he lifted the Nedbank Challenge trophy at Sun City. A former world number-10, Grace’s ranking had plummeted to 129th and the victory in Johannesburg could not have come at a better time.

In addition to the prize money, and a life-time exemption, Grace earned a spot in this year’s Open Championship at Royal St George’s alongside Armitage and South Africa’s Jaco Ahlers, who tied for fourth on 15-under with England’s Jack Senior.

“I had a bit of a sour taste at the end of last year because knew I wasn’t in The Open. I ticked a lot of goals this week – back in The Open and I’m into the World Golf Championship in Mexico. This has kick-started my year perfectly.”

Written by Lali Stander and Michael Sherman on behalf of GolfRSA.