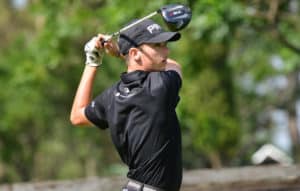 Ethan Gough of Hillcrest romped to a comprehensive 3-shot victory at Royal Durban Golf Club on Sunday 8 September 2019 to win the opening tournament of Season 3 of the Bridge Fund Managers Junior Series.

The 17-year-old Maritzburg College pupil, coached by Sean Coetzee at the SCIEG academy, shot level par 73 with Matthew Kruger and Christopher Gutuza three back. Ethan built up a substantial 6-shot lead including a tap in birdie on 13 after his bunker shot lipped out for eagle. However, he dropped a few shots as nerves and blustery winds got the better of him over the final few holes.

“At some point in the round one of my playing partners told me I had a 6-shot lead and I think I became bit defensive, trying to protect the lead and this resulted in me dropping some shots on the back nine,” said Ethan, a member of Kloof County Club.

By winning the title Ethan has secured his place in the North regional final of the #BridgeJuniorSeries to be played over 36-holes in April 2020, where he will compete for the ultimate prize – an all-expenses paid trip to the Junior North and South Championship at Pinehurst, USA in July 2020.

“The opportunity to compete for a place at Pinehurst is definitely the main reason why I entered the Bridge Junior Series,” says Ethan, who aims to make the KZN inter-provincial team this year and become one of the country’s Top 20 amateurs on his way to realising his ultimate goal of turning professional.

“Ethan put on an impressive performance at one of South Africa’s iconic golf courses,” says Paul Stewart, Chief Executive at Bridge Fund Managers. “We look forward to seeing him take on the rest of the Season 3 tournament winners in April 2020.”

“Passion, love and respect for this incredible Game of Golf starts at a young age, and through the Bridge Fund Managers Junior Series, we at TaylorMade Golf are able to play a small part in contributing towards this over the season ahead,” says TaylorMade Golf brand manager Aaron Russell.